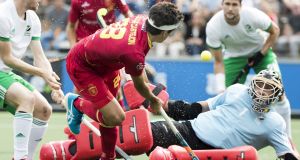 For the second time in as many months, Spain and – more specifically – Quico Cortes blocked everything Ireland could throw at him, falling 1-0 in their relegation pool tie at the European Championships.

Back in July, Cortes kept out 10 penalty corners in the World Cup qualifiers and the towering goalkeeper was up to his old tricks.

It leaves Ireland needing a result from their final game on Sunday (10am, Irish time) against Austria.

Against a Spanish side intent on sitting deep and attacking with minimal numbers, going behind early was the worst possible scenario. Alvaro Iglesias fed the superb Enrique Gonzalez who wriggled out of a tackle to shoot home for a third-minute lead.

It put Ireland in the same position as July, needing to unpick hockey’s equivalent of the blanket defence.

When they did, Cortes somehow managed to smuggle a Ben Walker cross off the goal-line before diving low to tip away a Shane O’Donoghue drag-flick.

Matthew Nelson had a backhand blocked over the bar and another O’Donoghue flick beat Cortes only for Ricardo Santana to clear his lines.

The second half took a long time to spark into life as both teams kept each other ar arm’s length for the majority. Lee Cole flashed a chance across the face of goal before David Harte did well to boot clear a Spanish corner.

In a rousing close to the tie, Cortes stepped up again in the closing 10 minutes, holding off smashes on target from Seán Murray and John Jackson.

The Egara man played the villain in the last minute for good measure, conceding a penalty corner with a deliberate foul but Spain closed ranks and nabbed the win.

It leaves Ireland second in the group with the third placed Austrians – a point behind – next.

Craig Fulton’s side have an immaculate record against them, winning 11 and drawing two of their previous 13 meetings. Keep that running and Ireland will stay up for a fifth successive Euros.

“We’ve got our work cut out for us [against Austria] and we’ve got to make sure we sort ourselves out first, get ourselves in the right frame of mind,” said Fulton after the game.

“We played well in the last 20 minutes, created enough to win the game \[against Spain]. In my opinion, in the last 15 minutes they were hanging on but we have got to better in front of goal. We need more composure but we don’t turn into a bad team overnight.”

The Irish women are in a similar boat on Saturday, needing a draw or better against Spain to keep their place in the top tier. They play at 11.15am in Amsterdam.

1 On healing and wild hurling: The re-education of Diarmuid Lyng
2 Few, if any, have given as much to Munster as Garrett Fitzgerald
3 Wexford best the weather and Kilkenny on a mad day to be hurling
4 ‘Your father works for my father’: Schools rugby turning toxic in the stands
5 Keith Earls far from ready to abandon centre stage
Real news has value SUBSCRIBE