Conor McGregor’s successful bombastic brand a sign of the times

UFC lightweight champion Conor McGregor is due to face Floyd Mayweather, who retied in 2015 with an unblemished 49-0, in a 12-round super welterweight boxing bout on August 26 in Las Vegas. Video: Showtime 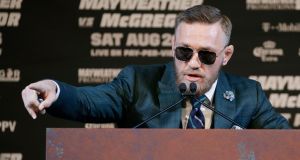 Conor McGregor polarises and is clever enough to know that if you do that you will always get around a solid half supporting you. Importantly you will sell. Photograph: John Locher/AP (

Crumlin’s Pied Piper has coaxed them to Las Vegas, the town where selling a licence to perform almost anything is irresistible.

Here we are. Conor McGregor, an MMA demi-god, a salesman, culturally a Kim Kardashian. Famous for an unerring ability to capture the zeitgeist of a younger generation bored with boxing’s stupor and confused divisions, stimulated by the celebration of ugly.

She releases a sex tape with Ray J. He tweets ahead of a 2014 fight with Dennis Siver a photo of himself and the German fighter captioned “Kiss them feet Nazi”.

She appears on the red carpet in a transparent Gucci number.

So it goes. McGregor selling his poor Paddy, great Paddy schlock and his bombastic brand, where inflammatory and offensive are shouted out, a Trump-like, sanction-free world where words and actions lose impact or meaning. He’s half black, you know. “From the belly button down.” Braggadocious.

A poster boy of generation Snapchat, the explicit and the toxic have short life spans but McGregor’s “fun” racism leaves stains, his misogyny remembered. The craic he has had.

In a more serious forum there is a diagnosis assigned to individuals who habitually violate the rights of others without remorse. Antisocial Personality Disorder. Surely not.

Artful communicator McGregor polarises and is clever enough to know that if you do that you will always be left with half of the room still supporting you. And importantly, you will sell.

This week there was some lowering of the volume but no change of the message. McGregor informed us of his current state of mind.

“Sometimes I regret saying things and say ‘why would I say stupid shit like that?’” he asked rhetorically.

He quickly took it back. “But then I don’t care about it,” he added.

Keeping in character, there is no telling the method actor from the fighter.

That McGregor’s hands appear too high for a defence, that his punches to the bag in the short clip released are poor to average, that he put out a redacted clip of knocking down a sparring partner, who claims he was thrown, sends mixed messages of anxiety and confidence.

In latter weeks Mayweather broke a lifetime of self-deification and celebration of his greatness to fall into a soliloquy on the sorrowful mysteries of age blunting performance.

It could have been seen as belated self-reflection rather than an exercise in faux frailty and pushing ticket sales.

Did Mayweather point out that he had not knocked anyone out since 2011? That he must have forgotten, or maybe found it too surreal.

“I just didn’t like when he called us monkeys,” added Mayweather not forgetting.

McGregor has never knocked anyone out in a professional boxing ring. As we head into the long night in Vegas there are several things his supporters use as serious charges against Mayweather winning.

McGregor is awkward, rangy, has a hard left and the fight is at 154lbs, comfortably just one pound below the UFC limit.

McGregor won’t win on points over 12 rounds. No one knows if he could last that long. He must use unpredictability before Mayweather’s intelligence gathers and he hits a comfortable rhythm counter punching, at which he is the best.

The eight-ounce gloves will add hurt factor to McGregor’s efforts but he first has to land.

It is at best an interesting experiment but circus material. Olympic gold medal winner Jessie Owens racing against a horse. It is Bobby Riggs and Billy Jean King playing tennis in battle of the sexes?

Both had underlying social commentary, Owens on how champion black athletes earned money in the US and King the way women are treated everywhere. McGregor breezily encapsulates both prejudices.

Fashionably McGregor’s vulgar chic chokes out nuance, his celebrity and $20,000 suits demanding a fabricated piece of glitz be treated as an epoch -breaking event.

Heavyweight champion Charles “Sonny” Liston, winner of 35 of his 36 professional bouts and one of boxing’s most intimidating athletes, faced Cassius Clay in 1964, a lightly regarded 22-year-old from Louisville. Clay won.

Upsets happen. A Mayweather defeat would soil his 49-0 record and post him as the man who held boxing’s reputation in his hands and dropped it. Rematch!

Both proudly represent what America has become. This is the business we are in. It is the commerce of pay-for-view dollars, a fight that has little basis in the traditional boxing imperative that you earn your chance, where popular attention and how much cash you can bring begets a claim to legitimacy. It’s false but it is where we are.

Two men stripped to the waist and fighting in a square ring finally affords McGregor dignity. Age is his greatest weapon and he has a puncher’s chance to win.

So too would Katie Taylor.