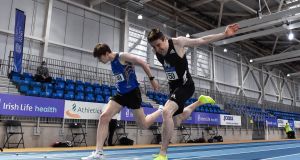 Some things in life can be all about timing. Being on time, for starters, being in the right place at the right time, and also being ready to strike when the time is right.

All three are important in championship distance running. Finishing times can also count for a lot, and that’s rarely been more evident than in the indoor season of 2021, a revolutionary year in many ways for Irish women and particularly Irish women running over 800m.

There has always been a rich history of 800m running in Ireland dating back to 1984 when Caroline O’Shea competed in the Olympic 800m final in Los Angeles, setting an Irish record in the process that stood for 10 years.

Down through the years there were a succession of Irish women knocking on the door of two minutes, only for Ciara Mageean to finally break through that barrier last summer and there’s little doubt now that this also broke a mental barrier for Irish women.

With the Irish indoor record changing hands twice in the space of four days, and a rewriting of the top five times after the Athletics Ireland Micro Meet at the National Indoor Arena this past weekend, times are definitely moving on.

Nadia Power borrowed the Irish record for another few days after her impressive run in Poland of 2:00.98, only for Síofra Cléirigh Büttner to claim it back while finishing second to her training partner Heather MacLean at the super-fast Randal Tyson Track Centre in Fayetteville, Arkansas, to reclaim and set a new Irish indoor record of 2:00.58. That’s been one clear thing about this indoor season: hardly an event goes by without fast times and competitive races that keep the heads turning.

Many have been quick to point the finger at the so-called super shoes that seem to have revolutionised running in recent years, on the track and road, but that’s just part of the reason. Some athletes have also been slow to admit any benefits, but for me it’s all part of the evolution of the sport.

Unlike some other sports like cycling, which embraces the technology and fine details to improve speed and efficiency, with each team trying to get an edge over the other, athletics seems slower to embrace and accept these changes.

Maybe if there was more open discussion and sharing of testing and benefits of shoe plates and foam, not just aimed at running fast in races but also allowing athletes to train harder and recover faster, then people would be more accepting and realise this is simply the way forward.

It’s not as if these shoes have a built-in engine: athletes still need to do the hard work in training and be diligent with their recoveries and continually looking for that extra edge to keep on improving, nutrition, recovery, sleep and lifestyle all playing a part.

The true spirit of athletics is always best seen in pure racing, and now it’s time to see the difference between racing and running fast. In recent weeks we’ve seen a lot of time trials with some quality racing too, like the men’s 800m last weekend when the Irish perennial favourite Mark English used all his guts and determination to hold off the new kid on the block Cian McPhillips in the final stride, the competitive drive pushing them both under the previous Irish indoor 800m record.

They also had a pacemaker up to halfway, which they won’t have in a championship race. There are numerous different professional teams now training around the world but particularly in the US where they often set up paced races to push the limits further than is often deemed possible in traditional races where athletes can be more focused on watching each other and protecting their own strengths.

The Micro Meet last weekend was another example of set-up races, more like practice events where through running fast times athletes not only qualify for championship events, but also gain confidence and belief in their own capabilities. It can also leave them less fearful in a race that is not so planned and orchestrated, assuming they maintain that confidence and belief.

Now, after all the focus on running and breaking records, it’s time to see how athletes fare in the championship arena, which is the true test of an athlete’s competitive instincts and ability to read a race.

Heading to the European Indoors in Poland next month with three Irish women ranked in the top 10 in Europe over 800m, it would be easy to think success is just around the corner but on an indoor track just six athletes will contest the final. Heats, semi-finals and final across three straight days are a very different prospect to a one-off race where you are chasing a time and some prize money.

Most people rest before a race and recover after. The pattern changes at the championships – the challenge becomes as much mental as physical as the rounds go on and it’s also a different style of racing as whoever slows the least in that final lap of a four-lap 800m race will finish strongest and be rewarded.

Most athletes are assisted in their drive for the faster times. It’s a mostly physical challenge because there is not much thinking when the pace is set; you just slot in and there is no fear of losing, as that’s not the most important result.

There is always an added complication when trying to run fast and also trying to win the race. When the primary goal is to win or at least place in the top three then the dynamics of the race change: very few athletes want to be in the lead and act as a sitting duck with the pressure building up behind.

For some athletes that is all they can do; so build a lead and hope they are just so much better than everyone else that they run away with the race. For others it’s all about positioning, timing and instinct and in the pressure bowl of a championship final, the form book doesn’t always predict medals.

Most athletes are now all realising that it’s possible to run fast indoors. Long gone are the days of the wooden steeply-banked 160 yard tracks. Indoor tracks are now built for speed – a sort of oval office of fast running – calibrated to centrifugally force the athlete in a forward momentum, and combined with the forward propelling spikes, well trained and motivated athletes are achieving results far beyond what they have run previously.

The traditional qualifying standards are likely to change in the future and the once controversial World Athletics’ ranking system will be of more value, as it will force athletes to race more often so that they can be in the frame particularly for Olympic and World Championship qualification.

There has always been a lot more skill to racing than running fast, and we should get a truer picture of where Irish athletes stand in Poland the weekend after next. The challenge here is to get through the qualifying rounds and perhaps into the final, and only then is there the opportunity for medals, and that’s certainly not a given when just like the athletes, the shoes can also have good and bad days in the oval office.