Video: She nervously watched her daughter medal at Under-18 Championships in Gyor 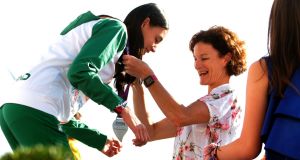 Sonia O’Sullivan was a proud mother as she watched her daughter Sophie win silver over 800m in the European Under-18 athletics championships at the weekend.

Before that she was a very nervous mother, and the European Athletics social media team captured her full array of emotions as she watched Sophie, still only 16, nicely beat her previous personal best with a time of 2:06.05.

That earned her the same colour medal as her mother Sonia won over 5,000m at the Sydney Olympics. And Sophie, born and raised in Australia but representing Ireland for the first time in Gyor this week, was presented with her medal by her mother.

Watch Sonia O'Sullivan live every moment of Sophie's silver medal-winning run in the 800m final at the European U18 Championships last night! pic.twitter.com/v7mwL52NKH

Speaking after the race Sonia says that she was actually more nervous watching the semi-final than the final; “When I saw her walking to the start line and she was dancing to the music I thought, ‘she’s still relaxed!’ So I knew she was going to run really well.

“She’s delighted with her performance. I knew that if Sophie was in range of the top three that she would get a medal.

“To be part of the Irish team out here has been fantastic. All the girls have been really welcoming to Sophie. This is her first Irish team. She only knows the girls the past couple of weeks. She’s had a fantastic time. It’s been brilliant. Hopefully there’s many more years to come.”