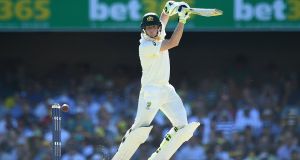 Australian batsman Steve Smith plays a shot on day two of the first Test match between Australia and England at the Gabba in Brisbane. Photograph: PA

The grim-faced Australian captain battled away to prevent England from gaining a first innings lead in a Test match that has, so far, been surprising, not just to the locals.

On an unusually sluggish Gabba pitch upon which the spinners have often seemed the most threatening of the bowlers, England’s much maligned tourists – the unnamed ones destined to being whitewashed according to some Queenslanders – were still in the game after two days of old-fashioned cricket, which has been fascinating despite the sluggish progress of the batsmen.

At the close on Friday Australia were 165-4 in response to England’s 302 and their innings had been stitched together by Steve Smith, now the lord of this manor rather than the court jester. Smith, 64 not out at the close, allowed himself no flights of fancy; his side were in too much trouble for that. His chief ally, to the relief of the Australian selectors, was Shaun Marsh, a controversial choice, who now seems a good one. It has been an unusually good game for selectors so far.

Meanwhile England, adopting the template that was so successful on the 2010-11 tour, ensured that run scoring was almost as arduous for Australia as it was for the tourists in the first innings of the match. Only in the last hour did Smith score with freedom. Before that he put his head down and grafted. Australia’s situation demanded nothing less. At one point they sunk to 76-4, whereupon Smith was grateful for the appearance of the patient, technically sound Marsh of stout West Australian pedigree.

The other west Aussie, Cameron Bancroft, had not lasted long on his debut. In Stuart Broad’s second over he prodded aimlessly outside the off-stump and was caught behind. With two left-handers at the crease Joe Root summoned up Moeen Ali for the ninth over of the innings and that decision was soon justified when Usman Khawaja was lbw on the front foot.

So Australia’s two batting trump cards were together and for 40 minutes they looked untroubled. England opted to keep David Warner’s boundary count down by employing sweepers square of the wicket but the Reverend appeared to recognise the virtue of patience. Then Jake Ball was introduced and Warner played that short-armed jab of a pull which caused his downfall in England in 2015 on several occasions. The ball went straight to Dawid Malan at mid-wicket and the catch was held, albeit after an alarming little juggle.

After tea Peter Handscomb, with the curious technique and impressive Test record, was lbw to Jimmy Anderson. His feet planted wide apart with the right one just a few inches in front of his stumps. He missed a full, straight delivery. Now the situation was serious for the home side but Marsh dug in alongside his captain. Anderson and Broad were cagey and frugal, Ball and Chris Woakes less so. Moeen was given much responsibility but as the ball softened the ball it was less inclined to turn. The wicket was sleeping. Serenity had returned.

For there had been some serenity for English batsmen at the start of the day before another vivid reminder that nothing can be taken for granted in these contests. In the morning Malan and Moeen added another 50 runs against the second new ball with remarkably few alarms. Then England slumped from 246-4 to 250-7 in the space of 17 deliveries.

During that early period of tranquillity any problems stemmed from Nathan Lyon, who was still finding substantial turn, which had the ball beating the outside edge of both left-handers. The off-spinner, an increasingly combative and opinionated Test cricketer, now propels the ball at quite a pace sometimes reaching 60mph. His control of length in this innings was impeccable partly because he was seldom challenged by the English batsmen.

His line against the left-handers could have been better; the modern way against them is to ensure that the ball pitches in line with the stumps, whereupon the front foot lbw is a constant threat. Instead Lyon, to his increasing exasperation, kept beating them outside the off-stump.

A Mitchell Starc bouncer accounted for Malan but not before he had registered his third and most important Test 50. He was caught on the square leg boundary from a top-edged hook. His 56 took 130 balls, eleven of which he hit for four, a statistic of some significance. This was an admirable, gutsy innings – even if the end was ugly – but it is clear that Malan would be even more effective if he could find a way to manipulate some singles along the way. Perhaps that is being greedy at such an early stage in his Test career. The simple, encouraging fact was that Malan’s 56 meant that this was the first time three Ashes newcomers had passed the half-century mark in the same match.

Now Lyon struck. First Moeen, sensing the need to consolidate, was lbw pushing forward. Then Woakes, driving waywardly, was bowled through the gate. Suddenly 300 was a distant dream especially after Jonny Bairstow was caught from a top edge as he tried to pull a not-so-short delivery from Pat Cummins, who has impressed in his first home Test match.

From here the Australians satisfied the call of Thursday’s front-page headline of “Bodyline” in the local paper. England’s tail was bounced incessantly though there are no reports of Root starting any sentences with: “There are two teams out there; one is playing cricket” outside the Australian dressing room.

In fact given his recent travails against the short ball Broad resisted nobly while making 20 though he was assisted by a dropped catch by Marsh on the boundary. By the close Marsh had made amends.