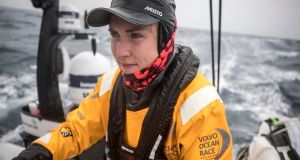 Ireland’s Annalise Murphy on Turn the Tide on Plastic during the second leg of the Volvo Ocean Race from Lisbon to Cape Town. Photograph: Sam Greenfield/Volvo Ocean Race

It is as if the end of the main hurricane season released a pent-up horde of escapists from the oncoming European winter season. Such has been the track of hundreds of yachts heading out into the Atlantic over the past month.

For many the route to warmer climes is an exodus with a fun-racing theme, such as the Atlantic Rally for cruisers which is approaching the mid-way point from Gran Canaria to St Lucia. With a fleet approaching 200 boats, over 1,000 sailors are taking part.There are at least two Irish boats involved.

The more serious end of the sport also has plenty of Irish interest. Annalise Murphy on board Dee Caffari’s Turn the Tide On Plastic left Lisbon less than three weeks ago on the second leg of the Volvo Ocean Race, and is expected over the weekend at the finishing line in Cape Town.

The fleet of seven boats has split into two ,with the leading three entries taking a northerly routing into the “tavern of the seas”, while Caffari’s team and three other boats are diving south seeking a more favourable wind strategy.

It’s a high-risk gamble but badly needed as the leaders had a lead of more than 100 miles. The next few days could become a race not to be last to Cape Town.

Further north, the transatlantic race for mini single-handers – 6.5m boats – ended in Martinique with some disappointment for Ireland’s Tom Dolan from Co Meath on his second outing in the Mini Transat race.

Having placed 22nd in 2015, he finished a creditable sixth overall in a combined fleet of 56 boats, though he had declared an uncompromising target of a podium place or better.

However, a misunderstanding of a course amendment for the opening leg from La Rochelle to the Canaries last month saw him obliged to sail back to the start and begin again, a manoeuvre that cost him two hours. The race is decided on cumulative time, and the delay effectively cost him fifth overall. At one stage in the 2,700 nautical mile race he was holding third overall.

“I’m really happy,” Dolan said on his arrival to Le Marin. “This result is the product of two years of really hard work. I made a stupid mistake in the first leg, but I made up for it in the second leg.

“The five sailors that finished in front of me had 10 times the budget I had, so in that respect I was the first of the amateurs.”

Dolan has spent the past two years living and working full-time in Brittany that is widely regarded as the world epicentre for short-handed and solo offshore racing. An announcement regarding his future plans is expected in the coming weeks.

Meanwhile, the Clipper Round the World Race that passed through the Atlantic at the start of last month and is already approaching Western Australia through the Southern Ocean had the tragic loss of a crew member this week, the third in the 20-year history of the event that amateur crew members pay to join.

Simon Speirs (60), a crew member on Great Britain, was washed overboard during a headsail change despite being clipped on with a safety harness. Although recovered from the sea shortly afterwards, resuscitation efforts failed, and he was pronounced dead by a doctor on the crew panel.

Earlier in the leg one of the entries had to be abandoned after running aground shortly after departing Cape Town. All the crew on Greenings were rescued.

1 Gordon D'Arcy: I know what Joe and Cheika would do. Fix the basics
2 Darragh Ó Sé: Cork and Donegal went out with the wrong attitude
3 Simon Easterby admits Ireland may need to take new line on maul
4 Kevin McStay: Maybe a knockout All-Ireland Championship is the long-term solution?
5 Sean Moran: Bloody Sunday centenary weekend will live long in the sporting memory
Real news has value SUBSCRIBE

Fernandes the spark for Man United; Gordon D’Arcy says get the basics right 07:36
Envoi Allen the star attraction at Fairyhouse 07:45
Gordon D'Arcy: I know what Joe and Cheika would do. Fix the basics 06:00
Sean Moran: Bloody Sunday centenary weekend will live long in the sporting memory 06:00
Connacht hopeful Papali’i’s red card against Zebre may be rescinded 06:00