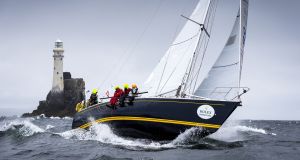 Evidence of a continued resurgence in offshore racing will not be in short supply this season as a new trend appears to suggest a trend away from short inshore races and regattas.

Fixture list congestion could also be linked to the dropping numbers in the latter.

Offshore races involving overnight and sometimes weekend commitments seem to be returning to vogue having previously been dismissed as too time-consuming for crews with limited free time.

The online booking system sold-out 340 boats in just under five minutes in January.

This fleet is in addition to the other “non-IRC handicap” boats that are expected to bring the fleet up to almost 400 entries departing from Cowes on Sunday, August 6th.

Included in the safety requirements are mileage quotas for crew-members to complete in addition to sea survival courses.

Demand for the Fastnet Race is serving as a boost for other offshore races and this year’s Volvo Dún Laoghaire to Dingle Race has now been accepted by the RORC as counting towards requirements and has led the RORC and the National Yacht Club (NYC) to seek a closer partnership.

“They will act in an observer capacity this year to look at the Sailing Instructions and Safety aspects and then in 2019, it may well be a RORC race,” commented Adam Winkelmann of the NYC’s organising committee. “Its a couple of months ahead of the Fastnet so we think its an ideal race as a qualifier.”

Wicklow Sailing Club’s Volvo Round Ireland Race is already a starred RORC race and entries last year were boosted to 52 boats with strong indications that the fleet will grow significantly towards a supposed maximum entry of 100 boats.

The “D2D” race is also expecting a bigger turnout this year with Winkelmann predicting at least 30 boats, possibly 35 or more for the race that starts on the evening of Wednesday, June 14th, a new development aimed at limiting the race to two working days off for most crews.

The Race to Dingle is also boosted by the support of the Irish Sea Offshore Racing Association that has nominated the race as its highlight for the season.

However, ISORA chairman Peter Ryan points the finger squarely at congestion in the Irish fixtures list as being the main culprit for the fall off in numbers at local and regional events and regattas.

“There’s simply no co-ordination between everyone, unlike many years ago when the ISA held the East Coast conference to decide the following year’s fixtures list,” he told The Irish Times.

It’s a point echoed by Winkelmann as well.

“I can already see the impact of that congestion, there’s just too much on – they’re (events) happening in an uncoordinated fashion and the geography is all wrong,” said Winkelmann, pointing to the need to move boats from one end of the country to the other in the space of one or two weekends.