Keith Duggan: Kobe Bryant’s darkness and light all part of the same kaleidoscope

His version of basketball was sweatier, nastier and more meaningful than the rest 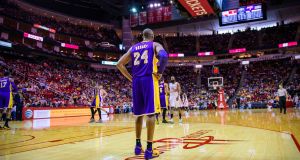 Kobe Bryant in action for the Lakers against the Rockets in 2016. Photograph: Jerome Miron/USA Today

In 2013 Nike released a four-minute film celebrating the epic basketball life of Kobe Bryant. It was called Show Us Again and was part advertorial, part work of art; a collage of moments and commentary chronicling Bryant’s dazzling, furious beauty as a basketball freak of nature from the analogue through to the digital age.

Nike are one of those cultural forces that generate conflicting emotions. You can loathe the company for its ethics and work practices. But then you go into an apparel store and, you know, wow: those are nice trainers.

Bryant, too, generated extreme and conflicting emotions for all of his life. After he was killed along with eight other people in last Sunday’s scarcely believable helicopter crash, it was said in many tributes that he transcended the game of basketball. And that was true. But he did that by dragging the watching world with him on a tour of basketball’s gutters and back-alleys: his version of basketball was sweatier, nastier, curse-ier, more hate-filled and meaningful than almost anyone he played against.

“I grew up with role models that were assholes,” he told Ben McGrath in 2015. “I mean. You know in a very competitive, fun, way. But they were assholes. You know Michael, his tongue was sharp as a whip. Bird? Sharp and, I mean, like, personal. They were nasty. Barkley was nasty. I grew up around these guys, so when I trash talk to somebody I’m going for the jugular. These younger generations, it freaks ’em out a little bit.”

By “fun” Bryant meant an on- and off-court battle for psychological and physical domination over opponents and, often, team-mates. Some people could survive in that environment but a few were crushed by it. Bryant thrived. He seemed to possess a preternaturally early acceptance of how his life would unfold. Barring injury, from the age of 14, it was obvious that he would become an NBA player: Bryant seemed to understand that he’d become an American icon too.

As he became the dominant name in the NBA, he was impossible to categorise as he was at once thorny, charming, articulate, conceited, self-obsessed, considerate, demanding, angry, funny – and these rotating moods and emotions were threaded together by athletic brilliance. He was flawed too: he shot the ball too much – except for that time when he stopped shooting completely to demonstrate the awfulness of his team-mates.

He could treat people terribly – he once warned Smoosh Parker, a fringe player, not to speak to him at practice. The revelation, in 2003, of a rape accusation and the subsequent investigation added a grim appendage to his dark on-court allure. And in the week since he died, much has been written and said in an attempt to someone how balance that episode against the man who was, by last Sunday night, revered around the world.

All of what we know about that sexual assault case is what came out in the media and official reports at the time. We know he was accused of rape. And we know that he denied it. The evidence was never heard and the case settled in a civil case. We know Bryant issued an extensive apology which acknowledged that, at the very least, he had behaved in a terrible way. We don’t know how the young woman coped afterwards because her story has never been heard.

And we were starting to get a glimpse of the post-career athlete who could have had a hugely powerful impact in raising the profile of women’s sport, which still struggles for oxygen.

Since Sunday night there have been countless stories which suggest a man vividly engaged in the lives of his children. And of others.

There’s a post going round, for instance, in which a woman tells a story about the hour Bryant spent a number of years ago with a five-year-old boy named Kobe. The boy was raised on the Native American reservations and was in hospital in Phoenix. He was terminally ill. He adored the Lakers star. She managed to make contact with the Lakers on the week that they came to Phoenix to play the Suns. Would it be possible for Bryant to maybe send a message?

When he was asked, he said he wanted to visit the child. There was no entourage, just him. For an hour, he talked and joked and played ball with this boy. His mother took photographs. Afterwards Bryant asked the woman who set the meeting up: What can I do to help? Is this a financial thing? Because I can take care of that.

The boy died a week later. His mother said that that had been the happiest hour of her son’s short life. And you try and square the fact that if Kobe Bryant was responsible for causing one person the most difficult and traumatic hours of their life, he also had a kind of miraculously positive effect on others during his time on earth.

But it’s not a ledger. It’s not plus and minus. It’s all part of the same kaleidoscope.

Bryant’s significance as a cultural figure can’t be explained in his five NBA championships. The first three of those, won alongside the behemoth Shaquille O’Neal came almost too easily. By the time he won the last two, in 2009 and 2010, he had matured into a gnarled, burningly intelligent and gifted baller.

No, Bryant’s basketball story is about devotion to craft and longevity. And fighting time. Boys and girls who were 10 years old when he burst onto their consciousness were 30 by the time he gave his famously brief retirement speech – “Mamba Out”. By then he had transformed himself into a gifted and loquacious communicator. In one of the earliest written assessments of Bryant’s legacy, the great Charles Pierce quoted the line that comes closer than anything else to explaining the essence of basketball. It belongs to Jim Carroll, the New York teenage basketball sensation and beat poet – and friend to the late George Kimball of these pages.

“In basketball it is possible to correct your mistakes, immediately and beautifully, and in mid-air.”

Bryant did that all the time, effecting mind-bending and time-bending scoring feats with the ball. What he did was beautiful to watch. Life is nothing like as pliable. The suddenness and thoroughness of Bryant’s disappearance from the world and the heartbreaking thought of his daughter Gianna with him has had a profound effect on his former friends and rivals. Paul Pierce, his old Celtics nemesis, has said he wants to go find his father, whom he hasn’t seen since when he was four.

O’Neal, his former team-mate with whom he fought like alley cats, has said that Bryant’s death has already changed the way he lives and acts. Many others cried openly. All the braggadocio and petty feuds and pride; all those cloaks fell away. What Bryant showed a generation of his peers and fans was how to grow and learn and to admit to human frailty and vulnerability.

On Sunday night, as phone land went berserk with the news, I remembered a night at the 2012 Olympics in London. Bryant was by far the most famous star at those games. The swimming finals were on. Phelps was racing. Bryant arrived late and sat in the area reserved for athletes, which was beside us in the media tribune. His presence caused a stir. He left just as the last race was about to begin, slipping out almost unnoticed.

I was curious to know how one of the biggest sporting icons on the planet does something as routine as leave a crowded building. So I walked down the steps to the concourse where I presumed there’d be some kind of security or courtesy car to ferry him away. But no. The concourse was almost deserted. Bryant had pulled his hood up and was walking away in that smooth glide of his, all by himself and entirely unnoticed. In that moment, he could have been anyone at all.