The $75,000 class was a qualifier for Sunday’s Longines FEI American Gold Cup 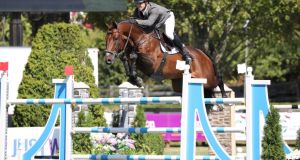 The $75,000 class, a qualifier for Sunday’s Longines FEI American Gold Cup, attracted a starting line-up of 50 riders, including five from Ireland of whom just Sweetnam and Hanley made it through to the 25-strong jump-off round.

In this, 10 riders again went clear over the shortened course designed by Tipperary’s Alan Wade with Cork native Sweetnam taking the honours when home in 31.67 seconds on his own and Spy Coast Farm’s 13-year-old Chacco-Blue stallion Chaqui Z. Mayo-born Hanley slotted into second on Heathman Farm’s 12-year-old Holstein stallion VDL Cartello (32.15) with Karl Cook of the USA finishing third on Caillou (32.20).

“Alan Wade built a very good and a very fair course,” said Sweetnam of the track. “Today was just to qualify for Sunday, so I don’t think he was out there to try and kill anyone. He probably had more clear rounds than he wanted, but it is still early in the week and there is still a lot of rounds of jumping to do. I think it was fair. It turned into a good jump-off for the class, which is also great for the show.

“I saw Cormac was two in front of me and he has a quick horse. Honestly, I was going to do the same numbers as him, but my horse isn’t as fast, so I knew that I had to do something, somewhere that he hadn’t done to catch him and then everyone else would have to catch me. The last line, my horse has a very big stride and it looked like leaving a stride out was there so I took a chance and it worked out.

“Chaqui is 13 years old now and I have had him since he was seven. He is a great horse and we have jumped everywhere together. This year he has jumped in Aachen and Dublin, the Hamptons and the World Equestrian Games last year in Tryon. We know each other very well. He is in great form at the moment.”

Eventing Ireland’s national championships are being staged this weekend at Kilguilkey House outside Mallow where dressage and show jumping take place on Saturday while Sunday is dedicated to cross-country action. Nine former national champions are among the 183 riders who have entered 250 horses for the weekend.