Shane O’Donoghue brings his century up as Ireland thrash Singapore 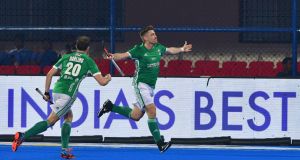 Shane O’Donoghue’s historic hat-trick helped Ireland on their way to the all-important top spot in Le Touquet, putting them within one win of a confirmed Olympic qualifier place.

The Templeogue man’s triple saw him pass 100 goals his country in an 11-0 mauling of Singapore saw Ireland leap above both Scotland and Egypt, availing a big helping hand from the Scots.

Crucially, first in the group allows the Green Machine to advance straight to the semi-finals, avoiding Thursday’s quarter-finals. Both semi-final winners will earn a place in next October’s qualifiers for Tokyo.

As Ireland warmed up, they received a big boost when they saw Scotland nab a last minute winner against Egypt which opened up the chance of taking first place on goal difference.

The target was a four-goal win and it took little time to eat into that target as O’Donoghue whizzed home the opening goal after just 45 seconds from a penalty corner.

They certainly were not hanging about as a full press terrified the world number 35 side and Conor Harte was on the board in the fourth minute and Matthew Nelson slid in a third soon after.

Stephen Cole finished off the important fourth from a selfless Ben Walker pass; Walker subsequently stole the fifth goal on the line from what would have been O’Donoghue’s 100th for Ireland.

He did not have long to wait for that to arrive, though, as he dragged in another corner two minutes after half-time for 6-0 and scored another before the end of the third quarter for good measure.

Harte and Stephen Cole added a few more with Luke Madeley and Lee Cole also weighing in. They now get to relax on the Pas-de-Calais coast for a couple of days before finding out who they meet in the final four.