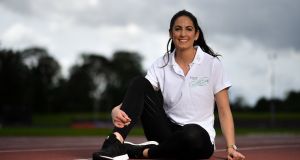 At the launch of the Irish Life Health Festival of Running is Jessie Barr. Photo: Brendan Moran/Sportsfile

After three years of walking the line between hope and reality Jessie Barr has retired from competitive athletics, not with any great fuss or fanfare but the simple realisation life has moved on.

Barr was first to make the family name successful in the 400 metres hurdles when making the final of the 2012 European Championships in Helsinki, younger brother Thomas eliminated in the semi-finals: she also made the London 2012 Olympics that same summer as part of the 4x400m relay only since then a series of injuries curtailed her progress – while the career of her brother has soared.

She’ll be 30 next month, her best of 55.93 still the second-fastest on the Irish all-time list, and having last raced in 2016, Barr has already accepted that Tokyo 2020 is now beyond her.

“I didn’t wake up one day and retire,” she says, “this has been a slow realisation, and I suppose I’ve had three years to come to terms with it. I came back thinking 2017 would happen for me, and it didn’t. Then I thought 2018 would happen and it didn’t.

“But after 2016, not making Rio, the motivation did start to waver. It felt like one injury after another, and because of that it was hard to give the effort that maybe I should have done. I started athletics because I just love it, if you’re not loving it, putting all the time and effort in becomes even more difficult, especially if you’re not getting the rewards.

“But I know I was lucky to make the Olympics, win three national titles, and get to make that European final in my first senior event. In the back of your mind there is always the thought ‘do I want to go back?’, but I’ve made the decision now, you can’t let emotion take over.”

Now a Sports Physiologist with the Institute of Sport, Barr made the announcement at the launch of the Irish Life Health Festival of Running, which takes place in Morton Stadium in Santry on July 28th: bringing together the elite and every-day runner, it includes a Mile Fun Run for children and a 3km Run in Santry Park, both finishing on the home straight in Morton Stadium before the Irish Life Health national track and field championships.