Ireland U-20s braced for another clash with familiar English rivals 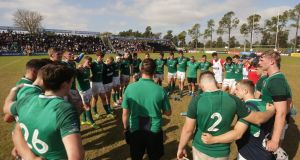 The countries meet for the third time this season and the second in this World Rugby Under-20 Championship with Noel McNamara’s Ireland having won both previous matches, in the Six Nations and the pool game.

Injury has seen six of the Irish squad return home prematurely from the tournament but on the flip side, Clontarf secondrow Brian Deeny, who missed out travelling with the squad initially after damaging ankle ligaments in training, has finally arrived in Argentina and will be on the bench for the fifth to eighth place semi-final. New Zealand and Wales are in the other one.

McNamara gives Leinster academy prospect Aaron O’Sullivan a debut on the right wing with David Ryan, younger brother of Leinster and Ireland secondrow James, partnering Liam Turner in the centre. Jonathan Wren is restored to the left wing while the irrepressible Craig Casey returns at scrumhalf.

UCD’s Michael Milne underlines his versatility in switching from tighthead prop against Italy to loosehead for this match with Clontarf’s Charlie Ward getting a first start in the number three jersey. Ahern has recovered from the injury that forced him off the last day and will partner captain, Charlie Ryan in the secondrow, with Ryan Baird moving to blindside flanker.

St Mary’s College backrow Ronan Watters has recovered from the head injury that kept him out of the Italy match while Azur Allison backs up at number eight.

England have made two changes and a positional switch to the side that thumped a 14-man Australia 56-33 with Kai Owen coming in at loosehead prop and Alex Coles introduced at lock. Richard Capstick switches to the backrow. In terms of drawing a line between the pool match between the teams, the teams show seven and eight changes respectively in personnel terms.

McNamara said: “In terms of our next opponents, we’re pretty knowledgeable about England, particularly this year. It’s the third instalment of a three-Test series, so we’re really looking forward to that challenge. I think we’ve both got a good idea of what’s coming down the line, so it’s a pretty exciting challenge for us.”

England coach Steve Bates has said England’s discipline was central to both their defeats against Ireland this season and has challenged his players to improve that significantly if they want to build on the momentum of what he considered the team’s best performance of the tournament in victory over Australia.

For Ireland it’s a case of what’s left in the tank physically and whether they can assimilate the new faces into a cohesive team in a short space of time. Whatever transpires they certainly won’t lack courage.