Covering all the bases: More clubs and organisations are relying on in-house media 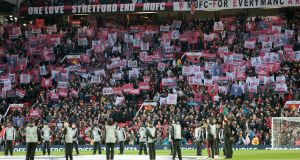 A few years ago Manchester United’s managing director Richard Arnold described the club as “the biggest TV show in the world”. Arnold reckons that they operate on social media at such a scale that they are “akin to a religion”.

Across Instagram, Facebook, Twitter and YouTube the 20 times champions of England have a combined following of 123.7 million people. For Real Madrid that figure is 219.7 million. Bayern Munich have 72.5 million. While these sorts of statistics are a long way from what happens on the pitch in terms of wins, losses and draws, they are the numbers that make global sporting organisations tick in the modern world.

For instance, for the year 2018 United generated £110m from matchday revenue. That’s just 18.6 per cent of the £590m total revenue they made during that same period, according to figures from priceoffootball.com.

In the first full year of the Premier League in 1993, that matchday revenue figure accounted for 44 per cent of the club’s total revenue. Since then the disparity in those numbers has widened and since around 2007 the gap has become more and more stark. As odd as it sounds, global sports teams like United have far bigger fish to fry than filling the stadium each week.

Those huge followings on social media have given sports teams and organisations direct access to fans via in-house media through which they can bypass the traditional methods of broadcasters and written press. It’s a trend that is growing rapidly around the world and in Ireland as well. In football the FAI now regularly distributes news and interviews via their own online channels such as FAI TV, the IRFU does similar while Leinster Rugby TV recently hit 10,000 subscribers on YouTube.

To use Arnold’s term: teams are now beginning to control that TV show and reap the financial rewards from it.

Dr Merryn Sherwood is a senior lecturer in Journalism at La Trobe University who has researched the trend of sports teams and organisations taking control of their own media and dictating what gets out.

“The clubs are enacting their power more now,” she explains.

“It’s still really new that we have social media and clubs have the ability to communicate directly with fans. I think what we’re seeing now is that clubs are really realising that power they have and that they can communicate directly. It used to be that they had to speak to the media to get to fans and now they don’t have to do that. It’s difficult for me to see how it will change in favour of journalists again.

“I think pretty much all the Premier League clubs now have their own subscription channels, certainly all the major ones. The last EPL rights didn’t quite reach the ceiling of the previous ones so if we’ve hit the bubble in terms of TV rights, they’re going to need to think of other revenue sources and selling content direct to fans is one of those.”

Four years ago Swindon Town banned all media from their press conferences, deciding instead to distribute their news via in-house channels. Around the same time Newcastle United implemented a similar measure by banning all journalists except for those from “media partners” the Mirror and Sky Sports News.

While in-house media and teams’ use of social media has given fans more insight behind the scenes than ever before, it also begs the question as to how those same consumers are affected by receiving the majority of content from just one side of the fence. Where traditional media would usually look deeper and question certain issues, the chances to do that are becoming less and less in a lot of cases.

Noel Mooney’s recent appointment as the FAI’s general manager was met with scepticism by many, among them Sports Minister Shane Ross who described the appointment as “unwise” given Mooney’s close links with John Delaney.

Mooney has not yet spoken to the media – indeed the FAI recently declined a request an for interview from The Irish Times – instead doing an interview with FAI communications director Cathal Dervan which was distributed on social media via the FAI’s own channels. Does this mean that consumers are being denied the chance to hear through independent questioning what he has to say about various issues of public interest?

“The general public want to know what’s going on, good, bad or middling and they have traditionally looked at it through the eyes of The Irish Times, RTÉ or whoever it might be,” says Rob Hartnett, CEO of Sport for Business.

“What has happened now is that sports organisations now have channels and capacity to get a message out to an audience that is listening. Is that sanitised? Well, yes, because you’re not going to be up front about something that is challenging. What newspapers see as news is what a sports organisation might see as a problem. What they see as news is things such as content from inside the camp, naming the team and the like.

“There’s no doubt that with where we are at the moment there’s an absolute need for independent media to prod and to get under the skin of what’s actually being said. Again, you look at just very recent history and if it wasn’t for Mark Tighe and The Sunday Times reporting on the FAI then we might very well be in a completely different place with the FAI. That was never going to be the thing that they distributed themselves. They haven’t been bad at telling their side of it but it never would have come out if it hadn’t been for a strong independent media.”

With the huge audiences that the likes of Manchester United have on social media, there is opportunity for teams to create another revenue stream through subscriptions and advertising on those channels. The data provided also allows organisations to see who their target audiences are, an ability they never had when news only appeared in a newspaper or on the radio or television.

So how far does this trend go? Sherwood says it’s all down to fans and what they demand.

“From all the clubs I spoke to, part of the reason they really value their own platform is that they can control the message. So that can imply that journalists will misconstrue what was said [in a traditional press conference or interview],” she says.

“I think the big issue though is do fans care? Do people care if their news is coming directly from clubs? And I don’t think we really know that yet because it’s still quite rare for clubs to cut off access completely. So I don’t think fans potentially understand the implications of what’s happening.

“I think it’s different in politics in that you can generally kind of sell it that journalism is inherently important to democracy and as a politician if you’re an elected official you have to answer questions. Sport is probably a little bit different to that in terms of selling that message. So are fans happy getting their content directly from the sports team or do they want independent and unbiased media to go along with that and, if so, are they still going to click on it and support it with subscriptions?”

There’s no doubt that consumers now receive more insight into the sports world than ever before thanks to social media. However, the question is: when does more insight become less knowledge of what’s actually going on?