It was like a discordant Last Night at the Proms, albeit closer to Schönberg than Elgar 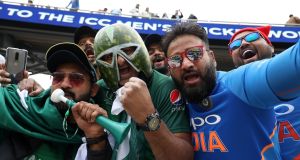 The English weather has been a most unwelcome guest at this Cricket World Cup. But try as it might – and there were downpours and drizzle, as well as mist and mizzle at Old Trafford – it was unable to stop India emphatically proving their superiority over Pakistan in a match loudly billed as the most watched cricket game in history.

As India finally confirmed their victory by 89 runs by the Byzantine Duckworth-Lewis-Stern method in the early evening gloom, one fan was beaming more than most. “I’ve paid the equivalent of £4,000 to come to England for a week for this one match, so I am so thankful the rain didn’t ruin it,” said Tarum Babhala, a furniture seller from Delhi. “This is more important than winning the World Cup final, because India versus Pakistan is such an epic rivalry.”

Thousands of other second- and third-generation British Asians, who greeted every run by waving flags, thumping their drums and blasting their vuvuzelas, appeared to agree. It was like a discordant Last Night at the Proms, albeit closer to Schönberg than Elgar. And it proudly knocked Norman Tebbit’s cricket test for six.

What the game lacked in drama it made up for in atmosphere. And after a week where a record four matches were abandoned due to the wettest June on record it provided a much needed jolt of adrenaline.

Even at 8.30am, two hours before the first ball was bowled, the streets around the Manchester ground had turned into a fiesta of colour and noise. Almost everyone was draped in avocado green or sapphire blue. One Pakistan fan even came on a white horse. But there would be no riding to his side’s rescue later in the day.

Among the Pakistan fans was Chaudhry Abdul Jalil, famously known as Chacha Cricket, the bearded mascot who has supported his country for 50 years. He predicted a party – and then a dazzling victory. “I was with Pakistan and India supporters on Saturday night and came together with not a wrong turn,” he told the Guardian. “India have beaten us for six matches in the World Cup but this time it will be different.”

Organisers had taken precautions, beefing up the security. Yet it was not needed as Pakistan and India fans sat and sang as neighbours, side by side. “It is always electric when the two teams meet,” said Qamar Ahmed, who had travelled from Essex with his 12-year-old son Momin. “Of course there is rivalry but cricket brings our two countries together. It is a shame India and Pakistan don’t play each other more often. There should be a cricket diplomacy.”

Some supporters came just to inhale the atmosphere. More than an hour after play had started organisers confirmed there were still more than a thousand people outside Old Trafford. Some were trying to sneak past the security guards. But most just wanted a small part in a shared communal experience.

If Pakistan needed any more encouragement, it arrived just before play in a barrage of tweets from their president, Imran Khan. His personal five-point plan to defeat India included winning the toss and batting, and banishing all negative thoughts. “Fear of losing leads to a negative and defensive strategy and crucially mistakes by opponents are not pounced upon,” the man who had won the World Cup in 1992 told his 9.77m followers. “Just give your best and fight till the last ball. Then accept whatever the result like true sportsmen. The nation’s prayers are with all of you.”

India’s prime minister, Narendra Modi, appeared to have his mind on other things, namely world yoga day. But soon his team had Pakistan in the cricket equivalent of the scorpion pose as the opener Rohit Sharma smashed three sixes and 14 fours in scoring 140 runs off 113 balls.

While Sharma’s bat became an instrument of torture, the Indian captain, Virat Kohli, preferred to accumulate his runs by stealth until accelerating to score a valuable 77 as India finished their 50 overs on 336 for five, their highest one-day score in England.

Pakistan have a deserved reputation for being the most unpredictable team in world cricket. Yet after 25 overs they had steadily moved to 126 for two and could at least think about a shock win. However the omnipresent threat of showers meant they had to keep an eye not only on the scoreboard but on their calculators, too. The DLS method, used to adjust targets in rain-affected matches, was in play and Pakistan were behind the over rate.

That meant they needed to accelerate their run rate – and fast – by smashing boundaries. But in going for glory they went down in flames, losing three wickets in 18 balls before rain stopped play at 166 for six.

It was not all of their own making. Indian genius played a part. The Pakistan batsman Babar Azam had looked dangerous, moving swiftly to 48 off 57 deliveries. But as he made to accelerate he was bamboozled by a sharply spinning delivery from Kuldeep Yadav that bowled him through the gate. Unsurprisingly it was immediately hailed as the “ball of the tournament”.

Pakistan knew their fate after that, although the weather meant it was a slow and prolonged death. When the game finally finished just before 7.30pm Indian fans were dancing on their seats and in the aisles, delighted at having thwarted the old enemy again. The Pakistani flags, meanwhile, were drooped at half mast.