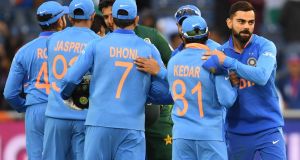 In the end the game was settled in three deliveries. They came just when the ebb and flow of play was beginning to run Pakistan’s way, and turned it back decisively against them.

They were chasing 336, and, midway through the innings, had made it all the way to 117 for one. Their two best batsmen, Fakhar Zaman and Babar Azam, were set together, 104 runs into their partnership, and while the required run rate was climbing all the while, they were ready to accelerate. India had already lost one bowler, Bhuvneshwar Kumar, to a hamstring injury, and for the first time all day Virat Kohli had something of the wild, wide-eyed look of a man who was beginning to feel the pressure.

Then it happened. It was India’s left-arm wrist-spinner, Kuldeep Yadav, who did it. It was a perfect delivery, too, the kind he must have pictured in his mind back when he was a little kid dreaming about playing for India in a match like this one. It drifted across the face of Azam’s bat as though it had been blown by a sudden gust of wind, then bit on the pitch and ripped back into him, flew through the gap between his bat and pad into his middle stump. The dismissal will be replayed endlessly, and when Azam watches it back, he will curse the way his feet got stuck in the crease, and how his bat was sucked away from his pad.

Pakistan split apart after that, as India, who had been threatening to overwhelm them all day, poured in through that one little crack. Two balls later, Yadav got Zaman, too, caught off the top edge at short fine leg. Then Kohli, reading the moment, brought the aggressive Hardik Pandya back into the attack. Mohammad Hafeez flicked a catch to deep square leg, and then Shoaib Malik poked ineptly at his very first delivery, which ricocheted into his stumps. That meant Pakistan had lost four wickets in 19 balls. Sarfaraz Ahmed struggled on, then he played on off a delivery from Vijay Shankar.

It was Shankar’s second wicket. He had only taken the first, Imam-ul-Haq, lbw with a wobbly little inswinger, because Kumar had gone off injured and Kohli needed someone to finish his over. It was just another little thing, one of many, that seemed to go India’s way. Pakistan hardly caught a break all day. And by the time the rain came, interrupting play for the fourth time, the only question left was exactly how much India were going to win by. Turned out, after play resumed so Pakistan’s tail could try and make 136 from 30 balls and the Duckworth-Lewis-Stern sums had been done, that the final margin was 89 runs.

This made it the most comfortable of India’s seven victories in the World Cup fixtures between these teams. Pakistan batted last in five of the other six, too, which made Sarfaraz’s decision to do it again here seem like a pretty bold choice. In the end it was just a couple of inches away from paying off.

In the early overs, Rohit Sharma played a cut off Hasan Ali that flew past the outstretched fingertips of Imam at point, then a pull off Wahab Riaz that passed just over the top of Mohammad Amir at short fine leg. Both Sharma and his partner, KL Rahul, sliced the ball just past their own stumps during Amir’s superb opening spell, too.

You could feel Pakistan starting to fret. It didn’t help their nerves that both Amir and Riaz were warned, twice each, for following through down the middle of the pitch, so were both perilously close to being ordered out of the attack by the umpires. Things got even worse when Rahul refused to come for a second run. Zaman had all the time he needed to run out Sharma, who was on 32, but he was in such a flap about it that he threw the ball to the wrong end. Sharma was let off again in the next over when he set off late for a single, and Shadab Khan missed with a throw from backward point.

Shadab paid for it when Sharma took 16 off his next over: two fours cut square and a terrific six over wide long-on from a full toss. That was the shove that got the boulder rolling, and afterwards India rumbled along through the middle overs while Sarafarz rotated his quartet of spinners. They’d never used more than three in a World Cup match before, which made the call to pick four here seem like another strange decision, although in the end Hafeez and Malik, roughly treated, only ended up bowling one over apiece. It was Sharma who did most of the damage for India. His half-century came off 34 balls, which made it the fastest of his career, and compensated for Rahul’s sedate 50 off 78.

Rahul eventually patted a catch to short extra cover off Wahab. Since that only brought Virat Kohli in, it didn’t necessarily make the Pakistanis feel much better about things. Kohli played second fiddle to Sharma, who pressed on to his second hundred of the tournament. He had made it all the way to 140 from 113 balls before he finally got himself out, scooping Ali straight to short fine leg. India were 234 for two then, with more than 10 overs to go. You felt then they might go up above 350, but they were pinned back by Amir, who bowled as well at the end of the innings as he had at the beginning, and got more reward for it, too. As it turned out, India didn’t need the extra anyway.