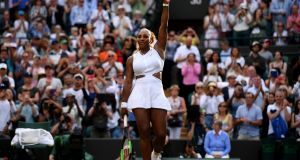 Smitten by the 15-year-old American prodigy Coco Gauff in the opening burst of Wimbledon week and the misery of the older Williams sister Venus getting schooled seemed almost forgotten.

Then another prodigy arrives and Serena Williams turns up. It seemed everywhere you looked this week and there was a tennis prodigy ready to beat up a Williams.

Out on court two the defending champion Angelique Kerber lay in ruins with the USA’s Lauren Davis proudly standing by a scoreboard that read 2-6, 6-2, 6-1. The omens for champions were not good.

The former Wimbledon Girls’ champion and Slovenia’s rising star, 18-year-old Kaja Juvan came through the qualifying tournament at Roehampton and had never previously faced a top-50 player, while the 37-year-old American had dropped just two sets in 22 career matches against qualifiers at majors.

On paper it seemed a mismatch, a teenager in too deep. On court, at least for the first set, it looked like another venerable champion being taken to her knees.

Juvan raced to a 4-1 lead in the first set as Williams took her time getting her serve grooved and her ground strokes calibrated against an opponent playing in the main draw for the first time. There was no panic, the sense being that among all of those 23 Grand Slam titles there was a tactic on how to beat a gutsy phenom on Centre Court.

Coming into the tournament and struggling with a knee complaint Williams had played in only 12 tour-level matches in 2019. Just four of the other 127 women in the field had fewer and 105 of them at least twice as many. There was some just cause.

But 4-1 became 5-2, three double faults from Williams aiding Juvan’s progress. Then a misjudged and laboured overhead volley from near the back of the court and the former champion handed the younger player the set 6-2.

By that stage the crowd had begun to sense the vulnerability of Williams and squeak out her name at the changeovers. Juvan’s lack of fear and the evidence from Gauff that age was no barrier added to the real threat of a Williams eclipse.

Somewhere over the break Williams unearthed that stored away intelligence and as she has done so often in her storied career came out rifling serves and stepping in to hit her shots. She broke the Juvan serve early in the set and kept the power and decibel levels high.

As if to send a message that she was now owning the match, Williams broke serve a second time, taking the set 6-2.

In attack mode the old lioness went after Juvan’s serve in the first game in the third set. But the young player’s resilience held. She did it again in the third game and again the teenager held off two break points.

But Williams was having her way, the service break arriving in the fifth game for 3-2. She was turning the match. She served for 4-2 swinging big and the match was in her grasp, Juvan visibly falling away with unforced errors and pouty shrugs.

Williams finally broke the Juvan serve for 5-2, the teen taking it back to 5-4 daring Williams to serve out the match. She finished with an ace winning 2-6, 6-2, 6-4. There would be no giant slaying today.

“I couldn’t ace her at the start of the match and I started out a little slow,” said Williams. “I like the pressure. I’d rather be in this position than any position and I play best when I’m down,” added the 11th seed, who will play doubles with Andy Murray.

Williams is scheduled to meet world number one Ashleigh Barty at the quarterfinals stage. The Australian beat Belgian Alison Van Uytvanck 6-1, 6-3 in 55 minutes.