Ageing lionesses Serena and Sharapova - but only one survives 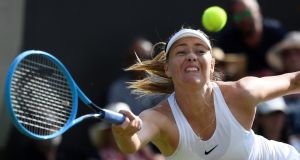 Still they are among the bigger names in the draw. Both Maria Sharapova and Serena Williams, fifteen years after one of the more memorable women’s singles finals, on Tuesday arrived back to conduct battles on a number of fronts.

Sharapova was on show court two, Williams as befits one of the best players in history on Centre Court. Physical ailments and body dysfunction have filled the space where certainty and domination once ruled.

Time is running out for 32-year-old Sharapova and Williams, who is 37-years-old. But like ageing lionesses they both arrived in Wimbledon looking for opportunity. Wiley and hopeful Sharapova shrieked and wailed to the amusement of some younger fans.

Her go to self-help routine of walking to the back court and facing the blank wall before turning to serve against Pauline Parmentier was still there for all to see. It has been one of her strengths in the past to be able to contrive a moment alone when thousands are watching.

Sharapova, ranked 80th, took the first set 6-4 from her 88th ranked opponent before the French woman won the second on a tiebreak 7-6(4). That tiebreak was the harbinger of trouble as Sharapova requested the physiotherapist to attend her left arm before starting the third set heavily bandaged. Between that and a strip across her nose she was looking more punk than Porsche ambassador.

The five times Grand Slam champion has sunk in the rankings because of an absence of four and a half months due a recurrence of a right shoulder injury on which surgery was required in March. Prior to that she had a 15 month drugs ban for taking meldonium and returned in April 2017. Since then she has reached one major quarter-final.

Strapped, she quickly went 2-0 down in the third set. Parmentier then seizing on her opponent’s new vulnerability and serving for 3-0 the physio arrived once more. Then 3-0 became 4-0 and 4-0 became 5-0 and Sharapova’s head was down.

There was no amount of talking to the wall that could help and reluctantly she retired despondent and again broken.

It means there will be no fourth round meeting of the two champions. That’s maybe for the best. Since Sharapova defeated Williams for the title aged 17 in 2004, she has won just one of their 18 encounters.

“ I’ve had a history of a tendon in my left forearm flaring up. It happened today in the second set, “ said Sharapova. “I’m here to play. I don’t what to be in pain. Next time I come here I want to play and do what I know I can do without pain,” she added. “It’s a tricky injury. I’ve had this before and I haven’t really got good clarification from anyone about what causes it.”

“I’m still proud that I’m here. This is not the easy way. They easy way is to do other things because I have set up opportunity for myself. But I love what I do and I still have a lot of passion for it (tennis).”

Williams raced through her first set against Italy’s qualifier Giulia Gatto-Monticone as if to get off court before that troublesome knee began to swell. She went 5-0 up, fought off the first flush of resistance from the 161 ranked 31-year-old and then a little doubt set in. Ranked 11, Williams has completed just six matches since the end of January.

A step off her best, mistiming shots, hitting too long and ballooning some out of the court, Williams dug out the second set, her usually reliable serve not even much of a saviour.

Serving for the match at 5-3 the delivery again let her down and Monticone back in. Frustration and occasional desperation was finally overcome, the American finishing it in two sets 6-2, 7-5.

“She never gave up,” said Williams. “It’s really good for me to play matches like that. I haven’t played a ton of matches. I feel the best I’ve felt since February. I’m feeling good that I can actually walk.”

World number one Ashleigh Barty is through. Last year’s winner Angelique Kerber and Petra Kvitova are through, Sloane Stephens advanced, Sharapova is gone and Williams survived. Just another first round.