‘Disappointed’ Gary O’Donovan will fight to get back 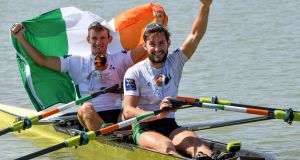 The O’Donovan brothers, Paul and Gary, have competed together in this boat, once both were available, since 2015. Phootgraph: Inpho

Paul O’Donovan and Fintan McCarthy will form a new lightweight double for the final World Cup Regatta in Rotterdam from July 12th to 14th. The O’Donovan brothers, Paul and Gary, have competed together in this boat, once both were available, since 2015. They became a sensation when they took a silver medal at the Olympic Games in 2016 and won the World Championships last year.

As the Irish Times noted last Friday, Fintan McCarthy and Paul O’Donovan were the most competitive lightweight double at the Ireland trial. Gary O’Donovan and Jake McCarthy - who is Fintan’s twin - will compete in lightweight singles, which are non-Olympic boats, at Rotterdam.

“Obviously, it’s disappointing not to be in the top boat, losing my seat,” Gary O’Donovan told The Irish Times. “But when I put it in perspective, I understand why it happened and how it happened.

“Fintan has done such good work. It’s not as if I’m losing my seat to any Joe Soap around the place, like. Fintan is obviously very good, as is Jake. The standard that is there now, to (merit a place in) the boat all of us would have to be in our very top form to get a chance.

“When I’m not in my top form at the minute it is expected that Fintan, who is in his top form would beat me. It is not out of order than I am not in it.

“I have no reason to be feeling hard done by. Fintan is quite deserving of that place, so fair play to him. I’ll just have to put in more time and more effort and keep trying to get back in.”

The chance of regaining his place may come within weeks. The Ireland high performance director, Antonio Maurogiovanni, is prepared to retrial the crew if it is thought necessary. This trial, if it happens, would be in August, so the chance of either Gary O’Donovan or Jake McCarthy forcing their way into the boat is a long shot.

“I’ll try to give it a go anyway,” Gary says. ‘I’d love to get back into it before the World Championships.”

Monika Dukarska and Aileen Crowley form a new pair for Rotterdam. The two competed as a double at last year’s World Championships.

World and European champion Sanita Puspure will compete in the single, while Denise Walsh and Lydia Heaphy, who finished 12th at the European Championships, again form a lightweight women’s double.

The men’s double of Philip Doyle and Ronan Byrne, who placed 10th in Lucerne, will be the only men’s openweight crew to represent Ireland.

Mark O’Donovan and Shane O’Driscoll will row as a pair at Henley Royal Regatta. They go into action first on Friday.