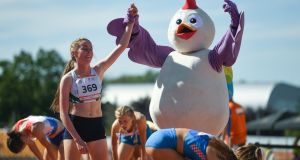 Sarah Healy secured Team Ireland’s first gold medal at the 2017 European Youth Olympics Festival in Gyor, Hungary running a personal best of 4:19.85 in the 1500m final on the last day of he championships.

Healy, from Monkstown, was a clear winner with Kazimierska Klaudia of Poland second in 4:23.17 and Austria’s Anna Baumgartner third with 4:23.28. Louis O’Loughlin finished seventh in the 800m final with a run of 1:56.98.

Ireland claimed bronze in the girls’ 4x100 metres final, the third relay gold won by the country since the championships inception in 1991.

Ireland had won their heat in 46.31 to qualify for the final as the second fastest.

Belgium turned the tables on the Netherlands to take the gold medal, reversing the placings in the first round.

Belgium won in a personal best time of 46.01, with the Dutch four coming in four hundredths of a second behind.

Team Ireland ended up winning six medals at the championships. Earlier in the week Lara Gillespie took a silver in Cycling Time Trial and Cavan’s Jade Williams secured a bronze for Ireland in the Hammer.