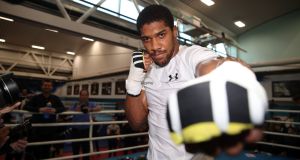 Anthony Joshua during a media workout at the English Institute of Sport in Sheffield on Wednesday. Photograph: Nick Potts/PA Wire

Anthony Joshua’s heavyweight fight with Alexander Povetkin next week will not be a sellout, with the promoter Eddie Hearn admitting he has found it more difficult to sell tickets than for the WBA, IBF and WBO champion’s previous title defences at Wembley.

“We have had to work a bit harder this time,” said Hearn. “Normally when you go on sale with an Anthony Joshua fight it just goes ‘ping’, but it has been slower than Wladimir Klitschko and Joseph Parker.

“The only thing that aggravates me is that anyone in boxing I have spoken to says it is a tough fight, whereas the man on the street goes to me: ‘When’s the [Deontay] Wilder fight?’ I say he has to get through Povetkin first and they say: ‘He’ll knock him out.’ Who knows?

“If Povetkin had come over and tried to nut Joshua at the press conference we would have sold out immediately. Instead there are a lot of people saying: ‘I will come in April for the Wilder fight.’”

However, Hearn insists he is still expecting 80,000 at Wembley a week from Saturday – with much of the problem coming down to the difficulty in selling coach packages, which are required as part of the deal to hire the stadium.

Meanwhile, Hearn has issued a warning that the growth in the number of fights that are held on pay-per-view will “end in tears”.

“You can’t say it is good for boxing, because it is not,” he added. “We are in a strong position now because our platform is solid and proven. But what will happen is other fighters will take risks on pay-per-views that won’t work. If the Josh Warrington v Carl Frampton fight in December does 100,000 buys on PPV I’d be astonished, so how are the fighters going to make any money?”

Hearn also warned Sky that it could do more financially for boxing when it comes to non-pay-per-view fights. “Sky are consistently backing boxing at a level where we can do an Amir Khan fight on Saturday and just about wipe our face,” he added. “What sort of business is that? You work on a Khan card for three to four months, sell 8,000 tickets and as a promoter you are thinking: ‘Can I break even? Where we make our money is pay-per-view.’”