Ireland in contention for one of three Olympic qualifying slots 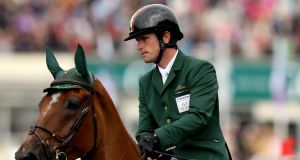 Ireland goes into Thursday’s second competition in the European show jumping championships in Rotterdam lying sixth (10.36 faults) of the 15 competing nations and in contention for one of three Olympic qualifying slots.

The opening competition was a 1.50m speed class while the second is a two-round 1.60m class. Best of the Irish individually is Offaly’s Darragh Kenny with Balou du Reventon (1.78). He is followed by Cork’s Shane Sweetnam on Alejando (3.83), Waterford’s Peter Moloney on Chianti’s Champion (4.75) and Meath’s Cian O’Connor with PSG Final (6.26).

Just one of Ireland’s three-strong team competed on the opening day of the European para dressage championships. Michael Murphy (Skjoldsgaard Hippovo) finished 12th on 67.357 per cent in his Grade 1 test where the Gold medal went to Norway’s Jens-Lasse Dokkan riding Aladdin (75.036).

Kildare native Judy Reynolds is the only Irish dressage rider competing in Thursday’s Grand Prix Special and is due to enter the Rotterdam arena on Vancouver K at 20.30 local time.

Aryn McClure’s Irish adventure could come to a winning end 06:30
Aidan Rochford ‘loving’ being back on Wexford panel 06:00
Stats show post-World Cup years throw up more debut opportunities 06:00
Women’s football is back and better than ever 06:00
Andy Farrell sidesteps Saracens issue at Six Nations launch 06:00
Here is your handy guide to sport on television this week