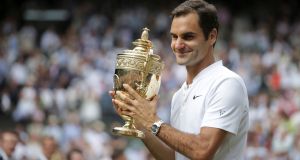 Switzerland’s Roger Federer poses with the trophy as he celebrates winning the final against Croatia’s Marin Cilic. Photograph: Daniel Leal-Olivas/Reuters

Shortly after Roger Federer composed himself from the red-eyed, emotional ball of tears he had become on his chair by the side of Centre Court, he looked up to his family, where his two sets of twins had been placed on the roof of the commentary box for a Grand Stand view of their father.

The girls Myla and Charlene and boys Leo and Lenny had no recollection of their father winning his last Wimbledon title five years ago. The girls were babies, the boys not yet born.

“They have no clue,” said Federer peering upwards. “They think it’s a big playground.”

The truth was it has been his playground.

The dominant force in world tennis, the age-defying Federer at 35-years-old may have pulled off the least complicated of his record eight Wimbledon titles but it is in his lap and separates him from the last player to hold seven titles, Pete Sampras.

A record that was sublimely completed over two weeks and seven rounds in which he did not drop a set, added a veneer of perfection to a breathless achievement. And in that he has shadowed Rafael Nadal, who won his record 10th Roland Garros last month, also without dropping a set.

How the two players have illuminated the game and shaped it their way with Federer now clearly the overarching patrician of the sport, one who hopes to return next year to defend his title.

“I didn’t think I was going to be this successful after beating Pete here [2001]. Winning eight is not something you can ever aim for in my opinion,” said Federer. “It is very special. My heroes played here, walked the grounds here. To mark history at Wimbledon means a lot to me because all of that. It’s that simple.”

On Sunday, it was a clinical, unsentimental and unforgiving Federer playing against an opponent, who carried a serious foot blister into the final.

Marin Cilic clearly struggled with his body and twice a trainer was called onto court, the second time just before the third set began requiring a medical time out as great swathes of padding were strapped to his left foot.

“It was definitely one of the unfortunate days for me. I got a very bad blister. Every time I had to do a fast change of movement I was unable to do that. It was very tough emotionally.

“I gave my best that’s all I could do,” said Cilic, who was in obvious turmoil throughout the match.

The Croat can thank the torrid run to the final for that, his quarter-final match against Gilles Muller lasting three and a half hours, his semi-final against Sam Querrey going for almost three hours for a total of 14 hours 28 minutes play.

Federer was on court for under 10 hours over the first six rounds and that included a 43 minute romp in the first round before Alexandr Dolgopolov limped off injured, prompting a debate about players rocking up to play injured to collect the first round loser prize money of €40,000.

Still, the moment was more a celebration of Federer’s timeless ability and if the old cliché of a player of the ages can be ever be applied it is to him, now with 19 Grand Slam titles, two of those earned this year in Melbourne and now London.

He left Wimbledon last year a broken man and wondered would he ever be back to the court he can call his own. At 34-years-old he took six months out of the game, a preposterous risk given his age and the levels at which he played.

But the world was wrong. Federer was right. Now the broken Andy Murray and Novak Djokovic will look as what the Swiss icon has achieved, draw from his perspicacity and hope to prosper from its long-term vision.

Cilic going down 6-3, 6-1, 6-4 in just one hour and 40 minutes was disconsolate that his effort came only in lunges and bursts and never once stretched his opponent. The second set lasted just 21 minutes, a freakishly short resistance, especially from a 6ft 6in bomber like Cilic, a US Open winner in 2014.

Cilic came into the match with 30 aces in his locker and it was expected that Federer would be retrieving balls from the Royal Box and the third row of the Centre Court stands outside the tramlines. But by the ninth game of the third set, he had delivered just three.

Nor was he in the mood to be coy about future plans.