Ireland women tune up for Argentina with narrow England defeat 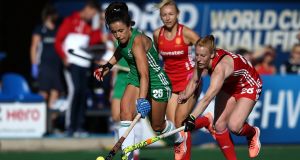 Ireland’s Anna O’Flanagan on the ball during her side’s defeat to England. Photograph: Jan Kruger/Getty

Irish coach Graham Shaw says his side is “not fearing anybody” as they face up to a date with Argentina on Tuesday in their crucial World Cup qualifier, bouyed by a strong showing against world number two side England.

For long periods Ireland were the stronger side against the English - who featured nine Olympic gold medalists - but ultimately fell to a 3-2 loss in their final Hockey World League group match.

England had built a 2-0 lead in the first half, scoring from their two attacks of note with Sarah Haycroft’s attempted cross turned in unfortunately by Zoe Wilson before Shona McCallin tipped in a penalty corner move.

Ireland bounced back almost instantly after the break with Nicci Daly and Katie Mullan both shooting home on the backhand to make it 2-2.

They came just two minutes apart with Daly latching onto an Anna O’Flanagan pass before unleashing a powerful backhand shot.

Mullan then produced a spectacular diving shot from the top of the circle that flummoxed Maddie Hinch - the 2016 Goalkeeper of the Year - dipping under her left hand and into the goal.

But the game was settled in the 43rd minute when Alex Danson rebounded from England’s second penalty corner.

Speaking afterwards, Irish coach Graham Shaw said he was: “very disappointed but proud at the same time. Our performance was absolutely superb from the very first minute to put a side like England on the back foot for long periods, we should be very proud of ourselves.”

It gives them a big confidence boost for the tie against Argentina, a tough ask against the world number three side in their first shot at World Cup qualification.

On the men’s side, Ireland take on Germany on Monday at 3.0pm (Irish time) in their final group with progression already assured.