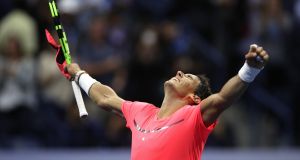 Rafael Nadal is through to the last four of the US Open. Photograph: Matthew Stockman/Getty

Not everyone is reading from the pages of The Tales of the Unexpected at this US Open. Rafael Nadal is writing his own story, advancing to the semi-finals on day 10 while ignoring the carnage around him, from the absence of his long-time peers, Andy Murray, Novak Djokovic and Stan Wawrinka, to the disintegration of young and not-so-young contenders who have tried but failed to fill the void.

Among the dreamers still wide-eyed and innocent in the quarter-finals, Andrey Rublev stood tall, a 19-year-old Russian with attitude, athleticism and no regard for reputation. He announced himself properly here and will take his place alongside Alexander Zverev, another blond teenager with Russian roots, Borna Coric, Nick Kyrgios and all the other hopefuls waiting for the stars to dim.

But, in the heat of battle, Nadal shone with all the brightness of his pomp, cutting down Rublev with the detached iciness of a surgeon. It took the world No1 an hour and 36 minutes to beat the prodigy at the nursery slopes of his career, 6-1, 6-2, 6-2. Nadal thus allowed Rublev the number of games Murray conceded to him in the second round of the Australian Open – taking exactly the same time. How about that for symmetry?

And how the tennis wheel turns; Murray, who was No1 in the world at the time of walloping Rublev, announced on Wednesday he was taking the rest of the year off to rest his aching hip; Rublev, meanwhile, has risen 101 places in the ATP list to 53, and gave as good as his nerves would allow against the player who has taken Murray’s place at the top.

Nadal went into humble mode in the immediate aftermath. “It was a good match. Andrey, it was his first quarter-finals, but I’ve won the last two matches straight sets.

“This has been an emotional year. I’ve been playing well almost every tournament after many years with injuries. Very excited to be in that semi-final and I wish Andrey all the very best.”

It will be Nadal’s 26th semi-final in a slam, his sixth in New York. The player who revealed the other day he never wanted to grow old won his first slam in 2005 at 19, the same age as the opponent he took to the cleaners on Wednesday. The wheel of tennis some times moves slowly.

From the start, Nadal took the fight to the pugnacious teenager whose hero is Mike Tyson and whose father boxed at a good level as an amateur for the old Soviet Union. Rublev has occasionally courted trouble with opponents because of his fiery nature and this was obviously not going to be a garden party.

They traded early breaks, then the Spaniard caught him again to lead 4-1 after just over 15 minutes. The exchanges were quick and decisive, Nadal allowing the unseeded Muscovite little time to become accustomed to the surroundings or the occasion.

After 23 minutes, Nadal was a set up and on fire, with young Rublev metaphorically draped over the ropes. It was among the quickest sets of the tournament – but two minutes longer than Rublev took to take the first set against Britain’s Aljaz Bedene in his first-round three-setter.

From that moment to this quarter-final, Rublev inflicted serious bruises on some quality opponents: seventh-seed Grigor Dimitrov fell in three sets, Damir Dzumhur, who took a set off him in the third round and ninth-seed David Goffin, who was injured but pushed him hard in the fourth round.

Nadal, who twice came from a set down in the first week, got his game together to demolish the in-form Alexandr Dolgopolov for the loss of seven games, and has been building up to an ominous rhythm in pursuit of his second title here. On the 10th day, he hit it.

Rublev steeled himself to compete in the second set and got to 2-2, but from there to the wicked forehand that sent him the wrong way in the eighth and final game, Nadal hit the ball with all the precision and certainty that has brought him 15 majors.

At 31, he is fit again and ambitious. He has survived, as he reminded us more than once, and this is the dividend for a lot of hard work.

Rublev deserves credit for trying to stay with him, some times shot for shot, but there was an inevitability about most of the exchanges. His groundstrokes grew increasingly weary in the third set, a framed square cut in the first game landing deep in the seats behind him, and he was behind the game again.

The finish was routine.