America at Large: No end in sight to USA's NFL love affair 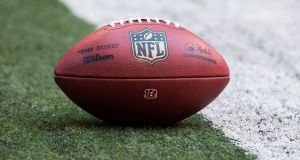 This is the NFL. Pills, thrills and headaches. For the rest of your truncated life. Photograph: Zach Bolinger/Icon Sportswire via Getty Images

It was a Monday night game between the San Diego Chargers and the Arizona Cardinals three years back. At the time, the NFL was dealing with the fall-out from Ray Rice punching his fiancée around a casino elevator so ESPN’s Chris Berman used a break in play to sermonise about domestic violence.

“The message has to go way beyond football and some need help to….” He stopped abruptly, his voice changing from solemn to shrieking in an instant as he roared, “And the punt is blocked!”

A cameo that perfectly captures the bizarre relationship between a society and its favourite sport. Berman wanted to speak out about a serious topic, he really did, but the Chargers taking possession 30 yards out, in the second quarter of a three-point game in September, had to take precedence. Worse. Nobody watching at home would have expected anything else. After all, this is the NFL. Nothing matters more.

The Kansas City Chiefs kick off against the New England Patriots at Gillette Stadium on Thursday night, opening a new season, rekindling the great national obsession.

Sure, the NBA tip-off will cause a bit of a splash next month, and baseball’s playoffs could offer some mild distraction but they are all dwarfed by the grid-iron behemoth. Here is a passion so fervent, a love so unconditional and occasionally demented that it’s capable of warping the mores of an entire nation. Check your conscience at the door because for the next five months normal rules just do not apply.

Some of these fans have cheered for a quarterback who had a side business training pit-bulls to participate in dog fights then hanging them if they underperformed.

Others have idolised a linebacker who paid off the families of two men killed in an altercation with him and his pals outside a strip club. They have even rooted for a running back convicted of child abuse for beating his 4-year-old son with the branch of a tree until his legs and buttocks bled. Appalling crimes, heinous individuals but this is the NFL. National Felons League and all that.

Whether in the stands or on the couch, everybody is complicit, willing to abandon their principles once the pigskin takes flight. They know they are watching players shear decades off their lives every time they cross those white lines. They have read the medical evidence about concussion and seen the documentaries. Heck, they even sat through the Will Smith movie.

Yet, every time they see a quarterback blindsided or a vulnerable wide receiver torpedoed in mid-air, they are out of their seats snorting approval, shouting, “He got jacked up!!” and immediately scrolling through fantasy stats.

Of course, that first time they heard about one of their childhood heroes committing suicide by shooting himself in the chest so the doctors might examine his intact brain and find out the source of his mental health issues, they tut-tutted before posting an RIP on Facebook.

Then they saw the highlight reel of all those bone-shuddering, cranium-jarring hits he made in his pomp and they smiled at the memory. In tribute, they dug his old shirt out of the garage, wore it to the next home game and got high-fived all through the carpark tailgate. This is the NFL. Where men win glory and die prematurely.

These supporters have observed the body shape and size of the players they worship morph beyond recognition over the past 25 years. They used to marvel at an outsized lineman tipping the scales at 300lbs and blocking out the sun.

Now, they worry if one of their own muscle-bound freaks weighs in anything less than that. They aren’t stupid either. They know the present crop are inflated by ingesting steroids or HGH and are often mainlining prescription painkillers too just so they can get the pads over their heads and onto their swollen, throbbing shoulders every Sunday.

When one of their own squad gets caught for performance-enhancing drugs though, the die-hards treat the four-match ban with the same equanimity as losing a player to a bad ankle sprain. It’s convenient yet all part of the rich fabric of the game. These things are bound to happen in a contact sport. Boys will be boys. Men will take stuff to try to be supermen. This is the NFL. Pills, thrills and headaches. For the rest of your truncated life.

As the evenings darken, the temperature drops and the snow starts to fall, what’s important is a full slate of games will start at 1 every Sunday and end in the wee hours of the following morning. A marathon shift where wondrous buttons allow you to hopscotch to matches where a team is threatening to or has just scored. Every play at your fingertips, too accessible and violent and exhilarating to spend any time sweating the small stuff like the troubling immorality of it all.

So, ignore the possibility of an avaricious owner moving the team across the country because another state is dangling more tax incentives and a free stadium. Disregard the fact too many journeymen are being ripped off on unguaranteed contracts that can see them playing in front of 80,000 one week and selling insurance the next. And just pretend the layer of commercial patriotism pockmarking every match isn’t bought and paid-for by the military as a jingoistic recruiting tool.

This is the NFL. Nothing quite like it. Nothing matters more.