Ronan Gormley will look to build on 250 hockey cap feat 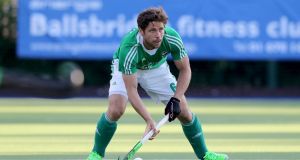 Ronan Gormley’s mark of 250 Test caps for Ireland this week was a remarkable milestone not just in Irish hockey but in Irish sport. The former Sandford Park and Pembroke player, who now lines out for German side Crefelder, is also possibly on his way to the 300 mark.

If he continues to show the durability that has largely kept him free from serious injury, he should be just short of the 260 mark by the time Ireland finishes the hosting of the World League event in Stormont in March.

Ireland had a match on Thursday in Spain where Gormley did not figure but has another one on Friday in which he may play some part, which will take his number to 251 caps.

Ireland does have an away training camp to Holland prior to the Stormont tournament but the team will play against Dutch club sides and they will be non-cap matches, so he won’t build on the 251 before Belfast.

If the 33-year-old takes to the pitch in all of Ireland’s three pool matches and the three crossovers he will add six more to his tally to take him to 257 by the tournament’s end. The closest to him in the Irish game is Eugene Magee. The Banbridge former hurler has 239 caps and like Gormley will probably add to that in the coming months.

On the women’s side, Ireland midfielder Shirley McCay, who made her debut in 2007 against Canada, hit the 100 cap mark against France, the 200 mark against Germany and now 10 years on sits at 231 caps and is in line to become the first Irish woman player to reach the 250 milestone.

Hockey, though does not have the most capped player in Irish sport. While Gormley is past Brian O’Driscoll’s mark of 141 (133 for Ireland and eight Lion’s Tests) for rugby, cricket’s Kevin O’Brien has played 279 matches for Ireland.

Part of the Railway Union hockey and cricket dynasty, 32-year-old O’Brien like Gormley is still playing for Gloucestershire. His last international T20 appearance was against Afghanistan last month.