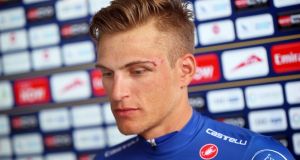 Germany’s Marcel Kittel was hit above the right eye by Ukraine rider Andriy Grivko during stage three of the Dubai Tour. Grivko was disqualified from the race for the incident. Photograph: Matteo Bazzi/EPA

There was controversy on stage three of the Dubai Tour after race leader Marcel Kittel was punched by Astana’s Andriy Grivko during the race.

The Ukrainian Grivko was disqualified and fined 200 Swiss francs (€187) by organisers after the stage was over, but though Astana issued an apology to Kittel and his Quick Step Floors team, that was not enough to placate the German sprinter.

Kittel posted a picture on his Twitter feed showing him bloodied from the blow, and wrote: “I won’t accept an apology for this. That has nothing to do with cycling. What Grivko did is a shame for our beautiful sport.”

Kittel had won each of the day’s opening two stages in a race which strongly favours sprinters, but was outside the top 10 on day three as his former Giant team-mate John Degenkolb, now with Trek-Segafredo, took stage honours.

Afterwards, Kittel suggested his disappointing finish was related to the incident with Grivko, which happened early on the 200km stage from Dubai to Al Aqah.

I won't accept an apology for this. That has nothing to do with cycling. What Grivko did is a shame for our beautiful sport. pic.twitter.com/vvMN5LzQN0

“When we passed a construction site, the sand began blowing and as soon as we went into the crosswinds we were fighting for position, which is always stressful, and Andriy Grivko punched me,” Kittel said on his team’s website.

“I really can’t understand how he can do something like that. I get that riding in the crosswinds is always tense, but it gives him no right to act like that. He could have hurt my eye. It’s a real shame what happened. In the finale, my mind wasn’t 100 per cent on the sprint, but I am happy I have no big injuries and I kept the lead.”

Astana sports director Alexandr Shefer had no complaints about Grivko’s disqualification and said the team would consider its own disciplinary measures.

“Today’s stage was really hard because of the wind; there were a few nervous and dangerous moments,” Shefer said. “In one of those moments Andriy Grivko has not coped with emotions and hit Marcel Kittel. Regardless of the causes of the incident, we must recognise that our rider acted inappropriately. It is unsportsmanlike and unacceptable.

“We apologise to Kittel and his team for what happened. Astana Proteam always adheres to a strict line in matters of sports ethics, therefore, we fully agree with the jury decision to remove Andriy Grivko from the race. Also, on behalf of the team, management will take further decisions on (the) rider’s punishment.”

Mark Cavendish (Dimension Data) was also outside the top 10 in an untidy sprint finish, with Aqua Blue Sport’s Adam Blythe the best-placed Briton in ninth place after his team-mate Mark Christian spent most of the day in the break.

1 Gordon D'Arcy: Ireland must conquer fear on a scary Halloween in Paris
2 Cork City expected to approve €1 takeover by Preston owner
3 Cillian O’Connor rejuvenated and eager to resume Mayo’s quest for glory
4 Robbie Henshaw likely to be the only Irish change for France finale
5 Cian Healy: ‘Realistically I got away with murder when I was younger’
Real news has value SUBSCRIBE

Gordon D'Arcy: Ireland must conquer fear on a scary Halloween in Paris 06:00
Seán Moran: Will a silent, empty Hill help to loosen Dublin’s grip on Sam? 06:00
Dave Heffernan delighted to have banished bad memory of his first cap 06:00
Cillian O’Connor rejuvenated and eager to resume Mayo’s quest for glory 06:46
Cork City expected to approve €1 takeover by Preston owner 06:00
Here is your handy guide to sport on television this week