The ice men (and women) cometh! 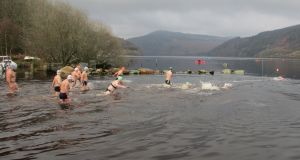 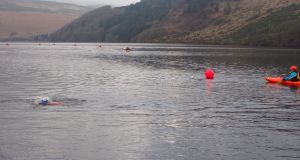 The problem with hypothermia is that you don’t realise you’ve got it until it’s too late. As the blood is quickly drawn to the vital organs to keep them alive, you first lose coordination, then consciousness, then you die.

That’s if you’re not dead already. The biggest risk of subjecting the body to frigid temperatures – such as open fresh water of five degrees Celsius, or less – is a heart attack. Either way, not many people would survive longer than three quarters of an hour.

Only this Saturday morning, off the very cold shore of Lough Dan in the Wicklow Mountains, 16 people will subject themselves to those exact conditions, wearing nothing more than standard swimming togs, a cap, and goggles: they’ll swim for a mile, and provided the water stays at five degrees Celsius, or less, and they survive within 45 minutes, they’ll be rewarded with the title of International Ice Mile Swimmer.

This is not some whimsical craze, but a now established and internationally recognised event: the Lough Dan Ice Mile, now in its fifth year, is approved and supported by Swim Ireland, and Ireland actually boasts the world’s second highest number of International Ice Mile Swimmers (35), after England (with 56). Only 196 in all have ever done it.

It is an extreme sporting event, however, and also “extremely dangerous”, says Fergal Somerville, the 53 year-old from Dublin and sort of Ireland player/manager of the International Ice Mile. A member of the Eastern Bay swim team, Somerville has already completed several extreme open water swims (the English and North Channels, etc…) yet this presents a uniquely testing challenge, which is clearly not for everyone.

“Most people will say we’re mad, absolutely,” he says. “But this is our golf. There’s something about open water swimming, out on a Sunday morning between Malahide and Portmarnock, the buoyancy of the sea water, every day is different, every time of the year.

“The Ice Mile is something to aim for over the winter months. It’s definitely not something you decide to do on the day. There are strict entry conditions and every swimmer has to prove they’re up for it, have done the training, acclimatised over the weeks, and of course get medical clearance.

“But I just love swimming in a place like Lough Dan, probably for reasons most people don’t. The water is very dark, which means you can never see the bottom, but also creates this sort of peaty brown effervescence, and as you swim through it, one hand following the other, the water bubbles over you, sort of like champagne, really, which is great feeling.

“But of course you get in, get it done, and get out. I’m also 19 stone, so carrying a bit of extra bio-frame. It’s definitely not a sport for skinnies.”

Somerville does much of the organising and helps coach many of the participants, as well as participating himself. The rules are basic: the water must be five degrees Celsius, or less (measured at three points, 30 minutes before event time); there can be no tidal advantage (hence the lake); the mile is swum over four 400m four laps, each with its own cut-off time, with an absolute cut-off time of 45 minutes. They can only front-crawl, stopping is not allowed, and again wearing only basic swimwear.

The safety measures aren’t so basic: all 16 participants are followed by their own assistant in a kayak, who can demand they leave the water should they exhibit any signs of hypothermia; there are several inflatable lifeboats on the water, plus a doctor and other medics on shore if needed.

“This is not like jumping into the Forty Foot on Christmas Day,” says Somerville, “where temperatures might be around 10, 12 degrees. And because Lough Dan is fresh water there is less buoyancy.”

The International Ice Mile was started eight years ago by Ram Barkai, the South African open water swimmer, whose life philosophy is built around giving “healthy respect to mad adventures”; he’s also heads the International Ice Swimming Association (IISA), whose aim is to get the Ice Mile in the 2022 Winter Olympics.

“When you get out, you’re not in great shape,” says Somerville. “You get dry as quick as you can, then keep moving. The last thing you do is jump into a hot shower, or have a hot whiskey. That’s for a little later, when the body warms up, and feels amazing. There’s no feeling in the world quite like it.”

* The Ice Mile starts at 10.30am on Saturday from the Lough Dan Scout Centre; spectators welcome.