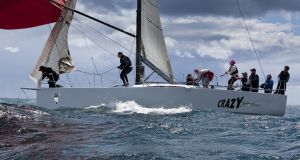 A shift in priorities for the Irish Cruiser Racing Association (ICRA) will be evident at next month’s annual conference in Limerick as sailing comes to terms with major changes affecting how the sport functions at grassroots level.

The ICRA body is undergoing some re-organisation following the retirement of two key founding commodores, Barry Rose of the Royal Cork Yacht Club and Fintan Cairns of the Royal Irish YC after nearly two decades of service to this branch of the sport.

Both remain close to the sidelines supporting the current commodore, Simon McGibney of Foynes Sailing Club.

However, the pressing need for new blood being felt around the country has led to a decision to dedicate the bulk of this year’s conference to club and class officers and ICRA’s support for them.

Yet one of the biggest challenges facing the sport and its existing participants will be a key objective for McGibney and his team in dealing with the clubs and especially those that organise large events.

Poor co-ordination of the national fixtures list regularly sees major events crammed into a small timeframe of the main summer season. Furthermore, events staged at a distance from one another often oblige boat-owners to choose one over another, thus depleting the turnout at both.

Cruiser racing crew panels often rely on a dozen or more regular sailors to take part in competition and, in some cases, deliver boats around the coast.

In the case of delivery by sea, the time commitment can be too much for many amateur sailors.

One ICRA initiative will be the CrewFinder system to help overcome shortages in people to sail on the existing fleet.

A formal crew-training and coaching programme is also to be launched in a drive to build competent entry-level sailors while matching them with suitable boats.

The RCYC in Crosshaven will host this year’s combined ICRA national championships in the latter half of June with close co-operation from neighbouring Kinsale YC, the Dún Laoghaire to Dingle Race is in mid-June and the Volvo Dún Laoghaire Regatta is in early July.

As a result, the highlights of a five-month season are compressed into a five-week period at various distances from one another. A similar scenario took place last season.

A survey of ICRA’s own participants in recent national championships indicated a 75 per cent preference for an early championship fixture.

It is unknown how many non-attendees would have preferred a late-season fixture when crews would be at their peak.

But with recent ICRA championships delivering in excess of 100 boats across five classes, the status quo will prevail while the resurgence of offshore sailing will see a new coastal championship introduced.

The annual ICRA conference will take place on Saturday, March 4th, at the Castletroy Park Hotel in Limerick with the full line-up for the day to be confirmed in the coming weeks.