Gavan Hennigan has finished third overall in the Talisker Whisky Atlantic Challenge after crossing ocean in under 50 days, making him the fastest Irishman to row across an ocean. 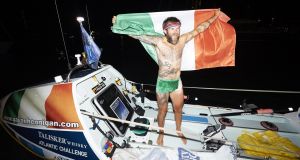 Gavan Hennigan celebrates after arriving at English Harbour in Antigua after rowing solo across the Atlantic Ocean in 49 days, 11 hours and 37 minutes.

Gavan Hennigan rowed into English Harbour in Antigua early on Wednesday night, the fastest Irishman to row across an ocean to finish third overall in the 12-boat Talisker Whisky Atlantic Challenge and by far the fastest solo rower.

The Galway man, 35, crossed from La Gomera in the Canaries in 49 days, 11 hours and 37 minutes. The previous record for an Irishman on this traverse was 118 days, set by Sean McGowan in 2010, while Tom McClean, an Irish-born Briton, rowed across the North Atlantic from west to east in 55 days in 1987.

Hennigan looked well but thin after having to put in a tremendous effort in the final weeks. He was excited to see the crowd which had gathered on the Caribbean island.

Upon arrival, Hennigan raised the Irish tricolour to salute the large crowd gathered to watch him complete the race.

“I’m so proud to have done this. Not many Irish have attempted a solo row across the Atlantic and I feel I’ve done it in style,” said an exhausted Hennigan. 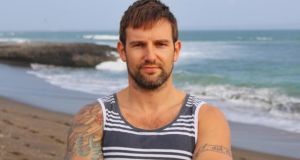 Gavan Hennigan's story: From alcoholic and addict to extreme adventurer

“ I had so many messages of support. I’d get up some days . . . and I’d be struggling but when I read the positivity in those notes and comments – from complete strangers – that would motivate me to get back on the oars and do it for them. To do it for Ireland.

“The last seven days have been relentless. At times, I’ve rowed up to 19 hours a day and yesterday when I woke up, I decided it was time to finish this. I’ve rowed for the past 14 hours straight. I gave that my all.

“This has been a life changing experience. I’ve experienced the beauty of the Atlantic sunsets and sunrises, the thrill of open ocean row boat surfing, the despair of driving headwinds and the joy of arriving back on land today. For the past 49 days I’ve had one single goal. To live life. I’ve embraced every minute and I’m so happy to be here finally.I’d like to thank Talisker and Atlantic campaigns for giving me the opportunity to make this journey. I’ll never forget it.”

Just three days into the race he had taken third by seizing the opportunity in high winds and big waves when others saw danger. He told The Irish Times: “I’ve done a lot of training off the west coast of Ireland, I’ve rowed a lot of sessions there in hairy conditions. I’ve rowed from Dingle to Galway, along the Cliffs of Moher in October. So I’ve definitely experienced some pretty wild seas. So when day three came and everyone [else] was just getting their sea legs, I just went for it. I did a huge day and just jumped up the leaderboard.”

He held that place for virtually all the race until American Oarsman almost caught him in recent days. Hennigan then found a way to up his mileage again and beat the US team to the line.

He had targeted 50 days, quite a mark for a new man to ocean rowing, but in the end he did better than that.

The top two crews, Latitude 35 and Row for James (both fours), had already finished, with Latitude 35 setting a new world record.

Hennigan is an adventurer and deep sea diver. As a young man he struggled with drug and alcohol dependence before reforming and testing himself with outdoor challenges. His row is in aid of Jigsaw, a support service for young people in Galway, and Cancer Care West.