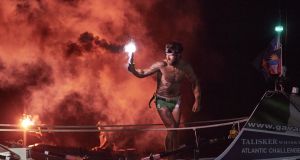 Gavan Hennigan has become the fastest Irish solo oarsman to cross the Atlantic.

Solo oarsman Gavan Hennigan has spoken about how he found the mental strength to win a race with a three-man crew and take third place in the Talisker Whisky Atlantic Challenge.

On day three in the race, as others played safe, Hennigan took advantage of powerful winds and big seas to secure third in the 12-boat fleet, an extraordinary placing for a single rower. Against the odds he was never headed, and completed the race in 49 days 11 hours and 37 minutes. He had to hold off the challenge of American Oarsmen, a trio.

“Y’know, seven days ago, American Oarsmen were within ten miles of me. Previous to that they had been taking chunks out of me every day. Conditions just weren’t in my favour. Then the winds kicked in and I was ready to go. I just decided to give it a really good crack. I said, ‘right, I’m going to really go for it here and see what happens’.

“I managed to hold them off for a couple of days, and then I started to believe I could do it. I dug deep. I broke it down into four-hour shifts. The tracker (the online graph of the position of the boats) updated every four hours. I was trying to maintain at least 10 miles (of a lead). I did an hour off, three hours on. I was going from each time check (on the tracker) to the next time check.

“Then, early this morning I had a little sleep and when I woke up they had gained another four miles on me. (I said)I can’t let this slip away from me, not this late. I have put in so much. So I dug deep. I was basically going hour to hour at that stage. The updates were coming in every hour: my friend Henry (LUPTON)was messaging me. I had the sattelite phone in between my two feet and I didn’t move out of the seat pretty much and I just saw the update every hour.”

Fourteen hours of non-stop rowing saw him break the challenge of his rivals on the final stretch. American Oarsmen took two hours and 27 minutes more to cover the 5,000 kilometres.

Hennigan’s record row on the longer course to Antigua was lauded by Leven Brown, who had lent assistance behind the scenes. The Scot is the most accomplished of ocean rowers, with a string of records to his name. “This is a huge victory. In all my years and miles rowing oceans I have never seen something quite like this,” he said. “Gavan has nailed it. A true hero of our time.”

Hennigan stayed mentally strong by concentrating on process rather than the big picture. He said he gained a lot of insight while at sea.

“I really saw the difference between the mind and the body. I saw that my body became this kind of machine: it just knew what to do - which was to just row. That’s all it did all day. I had to adapt to that routine. My body was going to do that repettition as long as I got on the seat.

“At the end of the day, my mind had to stay strong. I had to keep the body fuelled, rested and on the right track. And keeping it really simple with the head, not get too far ahead of myself.

“One thing I learned out there, I am so, so powerless. I was just going along for the ride out there. That ocean decided what was going to happen every day, it wasn’t me.

“I might say: ‘Tomorrow, I’m going to row 60 miles.’ Then the forecast wouldn’t come true. A lot of times you would have these local conditions, so you would have a squall coming through. That would blow out the wind for, like, five hours afterwards. So, any plan to do X amount of miles would completely go out the window.

“It’s incredibly frustrating. You have to say, ‘right, let’s see what happens here. If things work out, they work out, if they don’t, they don’t.’ At the end of the day all I could do was keep rowing.

“I had it a few days ago. There was a squall, which was just horrible. I was so frustrated, because it was meant to be more windy than it was. I was thinking that (the other crews) will be taking miles out of me here. The only option I had was to keep rowing. All I could do was (to accept that) I can’t do anything about the weather, all I can do now is to just row.”

Just rowing got him all the way there in record time. He is still getting used to being at the other side of the ocean he traversed.

“It hasn’t really sunk in. It’s so surreal - kind of weird to be here. I just had a chance to look at my Facebook (site)and Twitter, which I haven’t seen for days, and I’m gobsmacked at the amount of notifications and stuff.”

He has not made long-term plans.

“I’m going to chill out here. Long term, I don’t know. I feel like I could do that again. I could do something else in a rowing boat. Who knows?

“I definitely don’t feel like I’ve had enough of that. It was an amazing experience, I’d do it again, no problem. We’ll just see. I’m open to the possibility of just rowing back, crossing the North Atlantic. I will see how things pan out in the next few weeks.”

Resurrection beckons for Jamie Donaldson in Cyprus 16:39
Scotland end 18-year Welsh curse to finish on a high 16:31
Home comforts for Walker as he seals win for Man City 14:52
Valtteri Bottas pips Lewis Hamilton to pole position in Italy 14:47
New Zealand blow Australia away with record victory 13:22
Here is your handy guide to sport on television this week