Nadal is top of the ATP’s Race to London rankings for 2017, Federer is in second 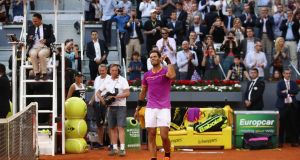 There was a moment in Rafael Nadal’s semi-final victory against Novak Djokovic at the Madrid Open on Saturday when it appeared as though the Spaniard had stepped into a time machine.

After a prolonged and gorgeous thrash-metal riff of a rally, Nadal suddenly turned the volume down from 11 to one. From the baseline he opened his racket face, chopped down hard, and then skipped and whooped as the ball fizzed over the net, embraced the red clay and died.

That drop shot, under extreme pressure, brought up match point. Moments later he had secured his first win against Djokovic in seven encounters stretching back to the French Open final in 2014.

Nadal has been assumed to be in decline pretty much since then. The narrative was agreed, vigorously nodded through, crossed off in triplicate: injuries had taken an irreversible physical – and then mental – toll on the Spaniard. He was the wrong side of 30. It was not a question of whether he was on the slide. It was by how much.

Yet here we are in May, with Nadal top of the ATP’s Race to London rankings for 2017, having racked up a 15-0 record on clay this season after winning his 72nd career title by beating Dominic Thiem in a gutsy final in Madrid on Sunday. Roger Federer, at 35, is in second having won 19 of his 20 matches this year. The rest – including Djokovic and Andy Murray – are flailing far behind.

Most pundits appear to think that Nadal is not quite the dominant force he was, even on clay. Perhaps it is because his biceps are less Popeyeish and his body a little older

Yet an intriguing question remains. How much of this is down to Nadal and Federer rediscovering their mojo – and how much to Murray’s and Djokovic’s careers hitting unexpected turbulence? Clearly both factors are at play but according to Dan Weston, a tennis analyst and professional gambler, the answer is more nuanced than some might think.

Most pundits appear to think that Nadal is not quite the dominant force he was, even on clay. Perhaps it is because his biceps are less Popeyeish and his body a little older, or that he has dropped sets to Kyle Edmund in Monte Carlo and Fabio Fognini in Madrid.

However, Nadal’s recent performances and Weston’s numbers offer a lively rejoinder. Among figures Watson uses to evaluate players, across multiple seasons and surfaces, is how successful they have been at winning points on serve and return.

By this measure Nadal has been hugely impressive on clay in 2017 – winning 69.1 per cent of points on serve and 48.3 per cent return points – a combined success total of 117.4 per cent. That is better than in any of his clay-court seasons except 2012.

It is also notable that the Spaniard appears to have extra pop on his service arm – against Djokovic, for instance, his average service speed was 116mph, a figure he reached only once last year; and that crucially, after a period where he looked mentally frail, he is back leading the ATP in break points saved, ahead of gunslingers such as John Isner and Ivo Karlovic, and in the top five for break points converted.

Federer has won 71.1 per cent of points on serve and 39.0 per cent on return on hard courts this year

And what of Federer? His dashing play this year has generally been attributed to two factors: fewer tournaments and a revamped and more powerful backhand, having finally got to grips with the 97 sq in frame he switched to in 2014. Watching him destroy Nadal with a series of stingray top-spin backhand returns in Indian Wells appeared a compelling argument for such a view.

However, Weston is not convinced that Federer is significantly stronger in 2017. As he points out, Federer has won 71.1 per cent of points on serve and 39.0 per cent on return on hard courts this year – a combined success rating of 110.1 per cent – which is actually lower than he achieved in each of the 2014, 2015 and 2016 seasons.

It does not mean that Federer is not playing sublimely well, of course. He is – anything over 110per cent is elite level. But perhaps his dominance is not quite as great as his win/loss record suggests.

Murray, meanwhile, was always likely to suffer a comedown after his stupendous run at the end of 2016, when he won the last five tournaments to finish the year as world No1. However, he should improve once he has shaken off an elbow injury and the shingles that has so far blighted his season.

The same applies to Djokovic, who showed enough in the second set against Nadal to suggest his slump will not last forever. Whatever happens, the forthcoming French Open and Wimbledon will be particularly compelling.

There is one other point worth making. Not so long ago tennis was considered a young person’s game. That is not surprising given that the number of male players who have won a grand slam in their thirties in the past 25 years can be counted on one hand – and that no one over 30 has ever finished the year as the world No1.

However, that will surely change by November given that by this time next week all of tennis’s great four kings will be in their fourth decade – with Murray turning 30 on Monday and Djokovic hitting the milestone the following Monday.

For years we have scoured the next generation, wondering who might be the one to take the crown. The resurgence of Nadal and Federer – and the lingering genius of Djokovic and Murray – suggests we might be asking the question for a good two or three years yet.