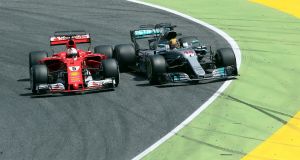 Lewis Hamilton won the Spanish Grand Prix after a tight strategic battle with his championship rival, Ferrari’s Sebastian Vettel. Mercedes called the race, one dictated by tyre performance, superbly after Hamilton had lost the lead to the German on the opening lap.

Red Bull’s Daniel Ricciardo finished in third, scoring the team’s second podium of the year. But he was more than a minute back from the leaders, who were in a two-horse race almost from the off.

With the retirements of both their team-mates in Barcelona it is a battle that is now clearly also one that will decide the Formula One drivers’ world championship. Hamilton has now narrowed the gap to Vettel to just six points, with 98 to the German’s 104.

He has won at the Circuit de Catalunya only once before, for Mercedes in 2014 the year he went on to take his first title for the team and his second championship. It his second win this season, having taken the flag in China, while his 55th career victory also brings him level with Vettel on two wins apiece this season.

The British driver immediately recognised the excellent strategic call Mercedes had made. “Fantastic job this weekend thank you so much, the strategy was on point,” Hamilton said. “I really, really appreciate all the hard work.”

Having been out thought on the pit wall by Ferrari for Vettel’s wins in Australia and Bahrain, Mercedes pursued a singular route in Barcelona that proved ultimately successful. The performance differential between the different types of tyres proved crucial and Hamilton’s team took the best route to exploit it.

The hard compound Pirelli supplied proved too hard to be of any use at the track and the differential between the medium and the soft was much higher than usual. The medium rubber was between seven-tenths and around two seconds a lap slower than the soft, meaning that while it had to be used the teams wanted to minimise the number of laps it was on the car. Mercedes had Hamilton on the quicker tyres in the final third where he was able to make use of them to take the lead and the win from Vettel.

The German jumped Hamilton, who had been on pole, on the long drag into turn one, and the German had the lead by the apex with the British driver only able to slot in behind him and Valtteri Bottas maintaining third from the same position on the grid. Vettel had been practising starts this weekend and had said he believed starting on the dirty side would not prove a disadvantage and certainly there appeared to be none. Hamilton made a good start but Vettel’s was perfect and he promptly made the most of it, opening a 2.7 gap to Hamilton by lap three.

Hamilton complained over team radio that he was unable to stay with Vettel, suggesting that despite all the aero upgrades Mercedes have brought this weekend their car remains unhappy in dirty air, in stark contrast to the Ferrari. Nonetheless Vettel was wringing the neck of his car out front to maintain the lead and proving the Scuderia had more than matched the Mercedes aero improvements in race pace.

Vettel pitted first on lap 14 while Hamilton stayed out with a 1.8-second gap to the German, who had to pass Felipe Massa and Ricciardo. Hamilton put in some very quick laps in an attempt to overcome his deficit. Vettel, however, was soon in clean air and with the new soft rubber up to speed was soon matching and bettering him in lap times.

Hamilton questioned being kept out for so long but Mercedes insisted their strategy was correct. “We are creating opportunities for later in the race,” he was told over team radio. They finally brought him in on lap 21 and showed they had adopted an alternative strategy, opting for the medium compound tyres rather than the softs.

It left Bottas out front and in front of Vettel on track and Hamilton just over seven seconds further back. The Finn did a mighty job of holding Vettel up for three laps until the German went for broke, sold him a dummy and put two wheels on the grass on the start-finish straight in a lunge to retake the lead up the inside into turn one. Determined and breathtaking, the German was in no mood for wasting time which he knew was crucial. The gap to Hamilton was down to four and a half seconds but the British driver was already using the slower tyre which Vettel had yet to take.

Ferrari, originally on an expected three-stop strategy, had to match Mercedes and switch to a two. They would still have to finish the race on the slower rubber so it was imperative Hamilton stayed in touch as he would be on the faster rubber at the death. Then the virtual safety car was deployed on lap 34 after Stoffel Vandorne turned into Massa and went off and the pivotal moment came.

It looked like Mercedes would pit the British driver but they kept him out until the end of the VSC period and brought him in just before racing began again on lap 37. Ferrari reacted and pitted Vettel a lap later but after racing had resumed and consequently he had lost his advantage. The pair went wheel to wheel at the exit of the pit lane and through the first three corners. Vettel squeezed the British driver wide through one and held the lead but Hamilton complained it had been a dangerous manoeuvre that forced him off, it was adjudged as fair and no action was taken.

Hamilton had the quicker tyres but Vettel had track position and a game of cat and mouse ensued until Hamilton finally had a clean run on lap 44 with DRS on the start-finish straight and slipstreamed the German to sail past round the outside into turn one. Vettel admitted he had no chance to defend against the better tyres and the DRS advantage the British driver enjoyed, noting he had gone past “like a train”. Twenty-two laps remained for Hamilton to hold the lead on the slightly less durable rubber.

He was concerned about making the tyre last but Vettel was clearly resigned to being unable to catch his rival. The gap was 2.6 seconds on lap 52 and by the end he had managed it and his rubber and took the flag 3.4 seconds clear. The pair had been in a class of their own. That they had been pushing one another to the limit was clear, Ricciardo was 70 seconds back and they had lapped the entire rest of the field.

Bottas retired on lap 40 with an engine failure. The Finn was using an older-spec engine that had already done four races, after his new one had to be replaced due to a water leak before third practice. Kimi Raikkonen, in the second Ferrari broke his suspension after contact with Max Verstappen into turn one, sandwiched between the Dutch driver and Bottas. The Finn retired on lap two as did Verstappen a lap later with left front suspension damage.

Fernando Alonso, who had put in a masterful lap in qualifying to put his McLaren in seventh, had been optimistic that he would finally make the chequered flag here. He has yet to finish a race this season because his Honda power unit has proved unreliable as well as underpowered. But although he lost places to 11th after being hit by the Williams of Massa into turn two, he did finally make a finish, albeit in 13th place and two laps down.

The two Force India cars of Sergio Pérez and Esteban Ocon continued what has been an exceptional opening to the team’s season with fourth and fifth places, their best of the year and the fifth race in a row they have placed both drivers in the points.

Renault’s Nico Holkenberg was in sixth; the Toro Rosso of Carlos Sainz Jr in seventh; Sauber were equally impressive to score their first points with Pascal Wehrlein’s eighth, with the second Toro Rosso of Daniil Kvyat in ninth and Romain Grosjean’s Haas in 10th.

Giroud remains part of Chelsea plans, says Lampard 18:25
Crowds of 4,000 to return to sporting events in England from next week 17:32
Former Ireland assistant manager Maurice Setters has died aged 83 17:06
Davy Russell on neck injury: ‘it was a very close one and I dodged a bullet’ 17:00
Aidan Coleman steps in for the ride on returning Epatante 17:00