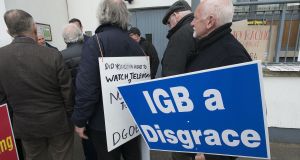 A group of greyhound owners and breeders have held a protest in Co Cork over what they call Minister for Housing Simon Coveney’s “decimation” of the industry.

About 40 members of the Irish Greyhound Owners and Breeders Federation gathered outside the Minister’s office in Carrigaline on Saturday , expressing dissatisfaction at the running of the industry in recent years under successive ministers.

The organisation criticised Mr Coveney’s decision in April 2011, when he was minister for agriculture, to appoint a former election agent of his then cabinet colleague Phil Hogan as chairman of the Irish Greyhound Board.

Carlow businessman Phil Meaney has been overseeing a major restructuring of the industry that includes the planned sale of Harold’s Cross Stadium in Dublin.

Gerry Kearley from Dundalk said he had travelled to the protest in Carrigaline because greyhound racing had been in his family for generations, and he was saddened to see the industry struggle in recent years.

“In the last 10 years the industry has almost disappeared. Unless something is done soon, it is going to disappear.

“My own opinion is that it needs a root-and-branch clean-out from top to bottom and a fresh start.”

Bill Murphy, chairman of the federation, said the aim of the protest was to get fair treatment from Mr Coveney and the Irish Greyhound Board.

“Our greyhound scene has been decimated by them. It started in 2010 and from there on it has been a downward trend all the time. The people running it haven’t a clue.”

Secretary of the federation Dave Cunningham said: “It’s down now to politics. Nobody has been held accountable for the mistakes that have occurred over the last 10 years.”

Defending his record as chairman and the manner of his appointment, Mr Meaney said he was in the business of making “hard decisions” to serve the greater good.

He said when he became chairman the board was millions of euro in debt, had a major deficit in its pension scheme and was facing High Court cases.

“The pensions and High Court cases are now sorted and the debt is cleared. I am a believer in doing the job rather than talking about it. With the help of a tremendous board, we have sorted out the problems.”

Mr Meaney said it was “regrettable” that Harold’s Cross had to close but that it was a decision that had to be made.

In relation to his hiring, Mr Meaney said he was interviewed and appointed by Mr Coveney and that he had been willing and able to go before the Oireachtas Agricultural Committee.

“I have on numerous occasions, privately and publicly, explained how I was appointed. I was told my application was subject to me going before the Agriculture Committee and I was always happy to do that.”

The Irish Greyhound Board announced the closure of Harold’s Cross Stadium in February after 88 years in operation. All greyhound racing in Dublin is now held at the Shelbourne Stadium, with an increase to four meetings a week at that venue.

The Irish Greyhound Board said an “over-riding financial consideration informed the decision to concentrate Dublin racing in Shelbourne Park”.