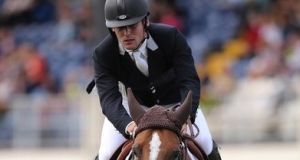 Thirteen teams started in this Division 2 event with Ireland holding the lead at the halfway stage on 10 faults.

Having retired in round one, Meath’s Alexander Butler recovered to finish on nine faults second time out with Caroline Byrne’s Irish Sport Horse stallion Hallowberry Cruz, although still supplying the discard score.

Louth’s Mark McAuley then put Ireland in the driving seat with a superb second round on Jocelyn Berthelot’s Utchan de Belheme, finishing with just a single time fault. Mayo’s Cameron Hanley and the eight-year-old Quirex had finished with just a time fault in the first round and came home with five faults in the decider.

However, the Belgium team were in inspired form in the second round - chasing points in their bid to regain Division 1 status. Clear rounds from Olivier Philippaerts (H&M Legend Of Love) and Pieter Devos (Dream Of India Greenfield) kept the pressure firmly on Ireland going into the last tranche of riders. Third-last to jump, Gregory Wathelet, had a fence down for four faults with Coree to give Belgium a two-round total of 21.

Riding the Minister for Defence’s ISH gelding Ringwood Glen, Captain Geoff Curran was last to go for Ireland knowing four faults, but no more, would give the team victory. Ringwood Glen had a toe in the water but Curran kept his cool to match his four fault score from the first round and seal success for the Irish on 20 faults.

The result brought up a hat-trick of Nations’ Cup wins for Ireland’s development team manager Blake who commented: “I knew coming here to Drammen that this was going to be tough but I also knew we had a good team. I said to Geoff going in, you can have a time fault or a fence but you can’t have both. He was under a lot of pressure going in last. I don’t think he knew for sure he was in the water and he got home just inside the time allowed - he did a brilliant job.

“Belgium had their strongest team and it shows the depth in talent we have in Ireland to finish on the podium in La Baule and win here in Drammen on the same day. I’m over the moon and the lads all did a fantastic job. The credit has to go to them and to their horses’ owners for this win,” he concluded.

As Ireland are a Division 1 nation they were not competing for points in Drammen which was a Division 2 fixture. The Irish Division 1 team, led by Rodrigo Pessoa, had earlier finished third in the five-star La Baule Nations’ Cup behind France and Sweden.

At home this weekend, the main jumping action takes place at the Cavan Equestrian Centre where 28 horses have been declared for Sunday’s National Grand Prix. Saturday’s first round of the Irish Sport Horse Studbook qualifiers have attracted 65 entries for the five-year-old class, 35 in the six-year-old division and 29 seven-year-olds.

There is national eventing action at Kircubbin on the Ards Peninsula on Saturday and at Kilguilkey House near Mallow on Sunday while Sarah Ennis, Elizabeth Power and Mark Kyle are competing in the first leg of the 2017 Event Rider Masters series at Chatsworth House in England.

1 ‘Manchester United are lucky to have you’: Klopp responds to Donegal schoolboy’s letter
2 Liam Toland: Larmour can distract England while others flourish
3 England coach Eddie Jones apologises after making ‘half-Asian’ comment
4 Cian Healy’s hunger for battle undiminished by the years
5 This month a decade ago, football and Dublin changed course
Real news has value SUBSCRIBE