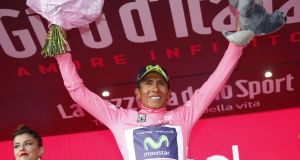 Nairo Quintana left several of his rivals behind on the final climb to win stage nine of the 2017 Giro d’Italia and take the overall leader’s pink jersey, but Geraint Thomas saw his general classification hopes dashed after a crash involving a police motorcycle.

Approaching the final ascent to Blockhaus, Dutch rider Wilco Kelderman (Sunweb) clipped the motorcycle, which was stopped on the side of the road. The ensuing collision caused Thomas and Orica-Scott’s Adam Yates – second at the start of the day – to lose significant time on the new race leader. Thomas, who appeared to suffer a shoulder injury in the crash, finished the stage 5min 7sec behind Quintana.

Those GC contenders not caught up in the incident progressed onto the final climb, with the final 10km at an average gradient of 9.4%. The leading group began to drop several riders with 8.5km to go, including Bob Jungels who had held the pink jersey since stage four.

Quintana, supported by Movistar team-mates Andrey Amador and Winner Anacona, led the way with Thibaut Pinot (FDJ) and Vincenzo Nibali (Bahrain-Merida) clinging on until the Colombian attacked on the steepest part of the climb. Quintana finished 24 seconds clear of Pinot and Tom Dumoulin (Sunweb), with Bauke Mollema (Trek-Segafredo) fourth as Nibali faded.

Quintana, winner of the Giro in 2014, now leads the general classification going into the second rest day. Tuesday’s stage is a 39.8km individual time trial from Foligno to Montefalco, and an opportunity for time-trial specialist Dumoulin to cut his 30-second overall deficit on Quintana.