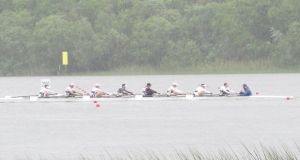 Lough Rynn, a venue which has already cost €1.1 million to develop and has a course approaching international standard, took another step towards becoming a major rowing venue on Saturday.

The Lough Rynn Regatta at the Leitrim venue ran hundreds of rowers from the length and breadth of the counry through nearly 100 races, some using seven and eight lanes.

The step was not an entirely confident one. While the first part of the day showed the course in all its glory, a violent squall rolled down the lake in the afternoon.

The schedule slipped badly, even with the junior 16 and junior 15 events cancelled - with competitors still out on the water.

From next season this event will be a two-day Grand League Regatta and work needs to be done on communication and public address when there are changes to the programme. Necessary improvements on the start and the finish area are already scheduled.

In the action on the water, NUIG ruled the waves. Their senior men’s and women’s eights won. Enniskillen performed the same feat at junior level, while Kealan Mannix of Skibbereen and Lisa Dilleen of Cork Boat Club were the top senior single scullers, with Bann’s Hannah Scott and Jack Dorney of Shandon the top scullers at junior level.

Dorney won on a re-row with Aaron Christie of Bann, after a launch stalled in Christie’s lane on the first run.

1 Jack Nicklaus’ Trump endorsement leads to avalanche of dismay
2 England lay down marker for Ireland after bonus point win in Rome
3 Six Nations - France v Ireland: Kick-off time, TV details, permutations, team news and more
4 Ireland, France or England? Who needs what to win the 2020 Six Nations
5 World Handicap System: What is it? How does it work? Will my handicap change?
Real news has value SUBSCRIBE