Plenty to look forward to in new sailing season 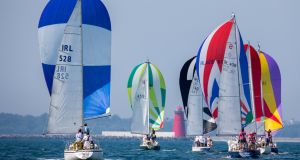 Part of the 15-boat entry in the Shipman 28 class racing in the Volvo Dun Laoghaire Regatta in July. Photograph: David Branigan/Oceansport

The coming 2019 sailing season looks set to offer as diverse a set of challenges as there are sailing options.

Of course, many regular sailors might argue that the traditional Summer ‘season’ no longer applies as evidenced by the popularity of winter-time weekend leagues for both dinghies and cruisers around the country.

Except for December and January, perhaps the season could well be described as ten-months long in duration.

There are overseas options available as well and the Caribbean will be a popular choice for events such as the Royal Ocean Racing Club’s 600-mile offshore race which is widely regarded as one of the toughest such races in the world.

A more leisurely option might be crewing or chartering at one or more of the island race weeks such as those at the British Virgin Islands, St Maarten and Antigua.

But at home, spare a thought for the hardiest Irish sailors who gather in large numbers at arguably the coldest time of year for the Irish Sailing Youth National Championships in April.

Over 200 boats are expected for the four-day event to be hosted in 2019 by the Royal Cork Yacht Club. The event will provide a useful indicator of form for future continental championships and Olympic prospects.

Prospects for the Tokyo 2020 games will also come into sharp relief in the months ahead as the countdown to the next Games gets louder and more pressing.

Currently, Ireland has not qualified for any discipline following the initial process at last year’s combined World Sailing Championships at Aarhus, Denmark in August.

In part, the situation is a product of the relative younger profile of the emerging Irish Sailing Performance squad. Men and women in the Laser events have their next opportunity in Japan in July and the 49er skiffs in late November.

The coming year will also see the Irish Cruiser Racing Association (ICRA) hold its national championships in Dublin when the Royal St George YC hosts the event in early June.

After the 2018 event was abandoned in Galway, a strong turn-out at the East Coast stronghold of Dun Laoghaire will be an important measure of the health of cruiser-racing; previous championships hosted by Howth YC and the Royal Irish YC have attracted turnouts of around 120 boats.

After the SB20 Sportsboat class held a successful European Championships on Dublin Bay in 2018, now the venerable Flying 15s return to Dun Laoghaire where the fleet is growing from an already consistent base.

Upwards of 80 boats from around the world are expected at the National YC in September where more than two dozen 15s are based. The neighbouring Royal St George YC has also seen a fleet emerge with five boats now sailing there regularly.

Indeed, with both the SBs and Flying 15s opting for September fixtures, the autumn seems to be the season of choice for major events that relish breeze.

Just ask any of the 300 competitors who sailed in the DLR Laser Masters World at Dun Laoghaire four months ago when the bay delivered a complete series sailed mostly on days blowing 20-plus knots and more.

After that epic series, significant dinghy championships on home waters are largely absent in 2019 albeit with plenty of regional options, notably the Volvo Dun Laoghaire Regatta in July where Dublin Bay offers plenty of inshore courses for dinghies while larger keelboats race in deeper water.

A preview of the year ahead wouldn’t be complete without touching on the impact of matters political and the ‘B-Word’.

Should a so-called hard Brexit emerge in the coming months, another impact, albeit on a lesser scale than some of the major headlines, will be on marine leisure activities.

While Ireland and the UK enjoy a pre-existing common travel area that is expected to endure, this only extends to individuals, not capital items such as boats and equipment.

Whether trailed or sailed, racing or cruising, a return to the days of flying the yellow Quarantine flag and customs clearance seems inevitable for travel and transit between these islands – and further afield.