If Minister of State for Sport Dara Calleary is looking for ideas, the old Santry sod a good start 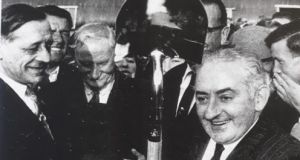 Billy Morton with his Santry shovel in 1958.

“Gentlemen,” the small man began, “grass is on the way out”.

Knowledge of sport is no excuse for a lack of imagination, or vice versa, and Billy Morton learned early on not to let one get in the way of the other.

In the spring of 1958, at the back of his optician’s shop on Berkeley Road on Dublin’s north side, Morton told a small gathering of reporters about his plan to build the first proper athletics track in the country. The grass was soft and pretty around Trinity, but only cinders had the makings of world records.

Morton knew something about running. In 1936, the year of Jesse Owens at the Berlin Olympics, he won the Irish national marathon title, putting in a fine shift of 2:48.27, in the colours of his club Clonliffe Harriers. He also had a way with words, when running his business and especially in the business of running, becoming this country’s first and last great athletics promoter, and a reminder still of the potential influence of the small man with big ideas.

It’s a legacy that lasts not just with the athletics stadium on the north side now named in his honour: Morton realised the value in thinking within and outside the box, and if the newly installed Minister of State for Sport Dara Calleary is looking for some fresh ideas, to go along with his post of Chief Whip, there may be some inspiration in the old Santry sod.

This is one ministerial position, junior or otherwise, which has never been shy of making claims and sometimes making a difference. Shane Ross, in his old term at the Department of Sport, generally left Brendan Griffin to work up the real sporting sweat but occasionally presented his own bold ambitions, telling an Oireachtas committee in 2017 that he would explore the possibility of Dublin hosting the Olympics, if Ireland’s bid to host the 2023 Rugby World Cup was successful.

As it turned out Ireland didn’t win that Rugby World Cup bid. And Ross might well have heeded the words of his once colleague Pat Hickey, then president of the artists formerly known as the Olympic Council of Ireland, given he was the one who famously responded by saying “we couldn’t even build the jacks” when it came to hosting the Olympics, after that suggestion was first put forward back by Gay Mitchell, then Lord Mayor of Dublin, back in 1992.

There is no doubt some would have scorned Morton’s year-long campaign for a cinder athletics track on the small slice of roadside land he had purchased next to Santry Court, the once grand demesne of Lord Barry and the Domville family. Famously small in stature, Morton’s big idea must have sounded like one of the most ambitious in Irish sport, helped in part by the gentle plea of Ronnie Delany, who two years earlier had won the Olympic 1,500m gold medal in Melbourne.

At a homecoming event covered by Sports Illustrated reporter Gerald Holland, the son of a Clare emigrant, the 21-year-old Delany said: “Gentlemen, while it’s all very well for people to be clapping me on the back and shaking my hand . . . the constructive thing I want to see is the building of a cinder track on the site which Billy Morton has acquired at Santry.”

That line alone prompted another Irish-American, Bernard McDonough, of Galway stock, to make a $1,000 donation to Morton’s cause and provide him with one of his chromium-plated Ames Company shovels, that business running since the Revolutionary days in America, McDonough working his way up from factory floor to outright owner, amassing a tidy sum in the process.

With the Ames Company shovel delivered via Trans World Airlines, Morton invited Delany out to Santry to turn the first sod. Grass was indeed on the way out, and it later transpired that cinders would be too, but for the first time Ireland had an athletics track worthy of international competition. All Morton needed then was a big event to help promote the opening, and Delany again obliged by agreeing to line up against some of the best milers of the time, including Murray Halberg from New Zealand, and a 20 year-old Australian named Herb Elliott.

Using his knowledge and imagination, Morton then convinced Halberg and Elliott to come to Santry after paying them a visit at the British Empire Games, being staged in Cardiff that July. Adopting one of the most successful sporting spoofs of all time, Morton told them: “We have these lush, green trees all around the track, and what they do is they suck in the oxygen all day long, and then in the evening, they release it all again. Just as the races begin. There is more oxygen around the track in Santry than anywhere else in the world. That’s what makes it so fast. That, and the specially slick cinders.”

Who knows if Halberg and Elliott actually believed him, but like any great promoter, Morton’s enthusiasm had sold them. Then on the evening on August 6th, having reportedly spent the previous night consuming his fair share of a black Irish beverage at a hotel on the Botanic Road, Elliott knocked more than 2½ seconds off the world mile record with his 3:54.5, with another Australian Mervyn Lincoln second in 3:55,9, and Delany third in 3:37.5, the first five runners all running inside four minutes. This was just four years after Roger Bannister ran his 3:59.4, and Elliott’s record stood for four years, until Peter Snell ran his 3:54.4, and the crowd assembled in Santry that evening, estimated at 25,000, remains a record attendance for an athletics meeting in this country, 62 years on.

Whatever about Morton’s chemical rationale for the fast times at Santry, his imagination didn’t stop there, and a year later, in 1959, he persuaded Lord Moyne, then chairman of Guinness, to pay for a banked cycling track, on the outside of the running track, and that summer put on a cycling event that among other things featured Shay Elliott, the Dublin cyclist who later become the first Irish man to wear the yellow jersey in the Tour de France, in a 4,000m individual pursuit against Fausto Coppi, the Italian cyclist who won the Tour de France twice, and the Giro d’Italia five times. Elliott won the race, and later that year Coppi travelled to Burkina Faso, for a cycling and hunting trip, where he caught malaria and died on his return to Tortona in January 1960.

Calleary, by all accounts, had bigger ambitions beyond Sport, his knowledge of both only now limited by his imagination.

All we are saying is give sport a chance.