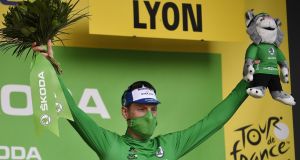 A battle unquestionably won by Peter Sagan, Sam Bennett is still winning the war for the green jersey after what proved a proper rollercoaster of a stage before the grand finale in the city of Lyon.

As an exercise in damage limitation too it just about worked out in Bennett’s favour, although Sagan hasn’t yet surrendered.

Two testing climbs in the first half of the 197km from Clermont-Ferrand to Lyon eventually split the peloton in two, Soren Kragh Andersen from Denmark riding off the front of the lead group with just over 2km to go take his first Tour de France stage win - and a second for Team Sunweb in this year’s race - while Sagan chased the maximum points of what remained.

Clearly a little worn by his earlier efforts, Sagan took fourth - and with that clawed just 18 points back on Bennett, having earlier gained another five points back at the intermediate sprint - making it 23 points for the day. It could have been more worrying for Bennett; the stage win, somehow deemed “flat”, was worth 50 points, with 30 for second, 20 third.

Bennett and his Deceuninck-Quick Step team had tried hard to keep the distance on the first group to a minimum for as long as possible, before surrendering with the gap already at two minutes with some 77km still to ride. Bennett’s effort done for the day, he rolled home in the second main group that finished 19 minutes and 48 seconds behind, in 106th place.

Having started the stage 66 points ahead of his Slovak rival, and with neither rider in contention for any intermediate or finish points on Friday, Sagan now closes to gap to 43 points, 262 to 219, which will certainly keep things interesting all the way Paris, next Friday’s relatively flat stage looking increasingly pivotal.

Sagan’s Bora-Hansgrohe team rode at the front for a lot of the stage, putting pressure on Deceuninck-Quick Step almost from the go. At the first big climb at the Col du Béal, about a third of the way through, Bennett started to waver, and despite the near full support of his team, just didn’t have the legs to limit the gap.

Inside the 40km, which included a pair of lumpy fourth-category climbs to get over, the Duchere and then then Côte de la Croix-Rousse, located 4.5km from the finish, it seemed Sagan was intent for the stage win, before Kragh Andersen made his decisive move, and did Bennett a small favour too.

Once approaching Lyon, where the Rhône and the Saône converge, Team Jumbo-Visma rode at the front too, helping Primoz Roglic retain his yellow jersey, ahead of his fellow Slovenian rider Tadej Pogacar (UAE Team Emirates). Roglic still leads the overall race by 44 seconds from Pogacar, with Bernard Bernal third, 59 seconds behind.

Dan Martin, after his excellent 11th place effort on Friday, finished the day in 67th, in the group 5:42 behind, while Nicolas Roche finished in 89th, in the small group that finished 8:53 behind, his day still memorable for the second stage win of a team mate.

At intermediate sprint at Courpière, after 38km, Sagan got the jump on Bennett to take 15 points in third, while Bennett got 10 points for sixth. It means he will wear the green jersey for the eighth stage of this year’s race on Sunday, the 175km from Lyon to Grand Colombier, which has one of the toughest uphill finishes of the Tour on a super-steep climb in the southern Jura.

The day was marked by another withdrawal by Pierre Latour from AG2R-La Mondiale, who was dropped from the bunch along with the sprinters up to Col du Béal. On Friday, his AG2R-La Mondiale team mate Romain Bardet did manage to finish after his crash, but later withdrew from the race after suffering a concussion.

The 29-year-old also took to Instagram on Saturday afternoon to update on his condition, saying that he had been to hospital for an MRI scan after suffering from headache and nausea and that scan revealed what he described as a “small brain haemorrhage”. The French rider doesn’t abandon easily, having finished 675 of his 680 pro races.

Sunday’s Stage 15 also moves back into a coronavirus ‘red zone’ where mass gatherings are restricted, and no fans will be allowed at the top of the Col du Grand Colombier, or 400 metres from the line and 300 metres after the line.

French administrative regions, known as departments, are classified as red zones when the spread of Covid-19 infections is high, with more than 50 new cases recorded per 100,000 inhabitants in the last seven days. The number of new, confirmed Covid-19 cases in France rose by 9,406 on Friday to stand at a total of 363,350.

1 Gordon D’Arcy: the next fear for Irish rugby is England in Twickenham
2 Seán Moran: Fallout from Tyrone final celebrations will concern GAA
3 Solskjaer says Mason Greenwood ‘needs to learn how to head a ball’
4 Pro14 teams need private planes to keep show on the road
5 How Dundalk’s opponents Sheriff started on wrong side of the law
Real news has value SUBSCRIBE

Nairo Quintana says he has nothing to hide amid doping investigation 09:25
Jamal Murray to the fore as Nuggets hold off Lakers comeback 09:02
Solskjaer says Mason Greenwood ‘needs to learn how to head a ball’ 08:44
David Moyes discovered positive test an hour after arriving at London Stadium 07:30
Gordon D’Arcy on what went wrong for Leinster; Donegal final postponed 07:06
Here is your handy guide to sport on television this week