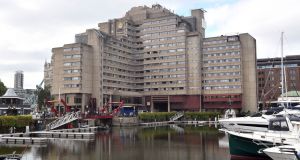 Two cases of norovirus have been identified after an outbreak of illness at one of the official London 2017 World Championships hotels. Photograph: PA

Irish Athletics team manager Patsy McGonagle has requested those athletes yet to compete in London are accommodated at a different hotel to that currently experiencing an outbreak of the vomiting bug gastroenteritis.

Race walkers Rob Heffernan, Brendan Boyce and Alex Wright don’t arrive in London until Thursday, ahead of their events on Sunday, and World Championship organisers the IAAF have agreed to provide a different hotel to where the Irish team are staying, the Guoman Tower Hotel, adjacent to the historic Tower Bridge.

Síofra Cléirigh Büttner, who runs in her 800m heats on Thursday evening, has also been transferred to a different hotel.

“This is essentially to eliminate any potential risk,” says McGonagle, speaking at the Tower Hotel earlier on Tuesday, where around 30 cases of the vomiting bug, and at least two of the norovirus, have now been confirmed.

“It’s better to be safe than sorry,” he added. “Right now Thomas Barr remains the only athlete on our team to have caught the bug, and thankfully he’s over the worst of it now, and should be back up about by this evening. But with the walkers not arriving in until Thursday I want to make sure they are not put any risk before their events on Sunday.”

Barr was forced to withdraw from his 400m hurdles semi-final, which took place on Monday, having been struck down with the illness the night before: he was then quarantined in a room set aside from other team members, as a number of similar cases were reported.

Earlier on Tuesday morning, a statement from Public Health England said around 30 people had been affected, with laboratory testing revealing norovirus.

When questioned on the matter at the hotel this morning, the head of Tower Hotel security staff told The Irish Times; “there was no evidence” they were the source of the illness.

In a statement, the hotel also added: “We can confirm that regretfully a small number of our guests have been suffering from an illness.

“We have worked collaboratively with the EHO (Environmental Health Officer) and IAAF to investigate the origins of the illness and can confirm that the hotel was not the source of the illness.

“We have followed strict hygiene protocol, ensuring that those affected are not in contact with other guests and all public areas have been thoroughly sanitised. We continue to liaise with the medical authorities and the IAAF to ensure the comfort of those guests affected and the health and well-being of all our guests remains a priority.”

The norovirus, better known as the winter vomiting bug, is often caught through close contact or by touching contaminated surfaces or objects. Most people make a full recovery within one or two days, but those affected athletes scheduled to compete at the London would find the illness debilitating.

Botswana’s Isaac Makwala, a medal prospect in this evening’s 400m final, also withdrew from his 200m heat on Monday night, and it remains to be seen whether or not he has recovered in time to compete. German triple jumper Neele Eckhardt collapsed as a result of contracting the virus but competed in the triple jump final on Monday, though finished a distant last.

Other members of the Botswana, Germany, and Canada teams have reportedly been affected, all of whom are also staying at the Tower Hotel. Not all however are athletes, but members of team coaching or back-up staff.

Either way, the remaining Irish athletes will be spared any potential risk.