Packers have the quality to overcome resolute Rams 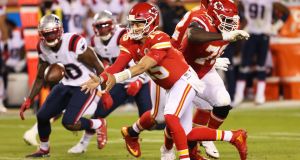 Patrick Mahomes of the Kansas City Chiefs makes a pass against the New England Patriots at Arrowhead Stadium. Kansas are favourites to see off the challenge of Cleveland Brownsi. Photograph:Jamie Squire/Getty Images

What the Rams need to do to win: Considering that Jared Goff is the almost certain starter only because John Wolford, an undrafted former AAF quarterback, is banged up tells you that the Rams aren’t going to win this one on offence. They do, however, have the best defence of any team left in the playoffs. If Aaron Donald, who has a rib injury, can pressure Aaron Rodgers, and Jalen Ramsey shuts down first-team All Pro receiver Davante Adams then the Rams could sneak a low-scoring game.

What the Packers need to do to win: The Rams offence is unlikely to go off for 45 points on Saturday, so the Packers just need to keep the score ticking over, forcing Goff to attempt to pass them back into the game. If Ramsey does keep Adams quiet then Rodgers’ secondary targets like Marquez Valdes-Scantling (20.9 yards per catch this season) and Aaron Jones need to get free as second options.

Key player: Billy Turner, offensive tackle, Green Bay Packers. With All-Pro tackle David Bakhtiari ruled out for the season, guys like Turner will have to deal with Donald, the best defensive player in the league, coming at them. Slowing him enough to give Rodgers time to throw will give the future Hall of Famer enough time to work his magic.

What the Ravens need to do to win: Lamar Jackson was electrifying against the Tennessee Titans last week, although he hurt them on the ground more than he did through the air. In fact, the overall Ravens run game has been great over the last few weeks; they rushed for 236 yards against Tennessee and more than 400 yards against the Cincinnati Bengals in the final game of the regular season. The Bills run defence, meanwhile, ranked in the middle of the pack in 2020.

What the Bills need to do to win: The Bills defence in general was not that impressive last week, and the Colts weren’t that far off causing an upset. Josh Allen, great against the blitz, needs to keep producing yet more off-the-script plays.

Key player: TJ Yeldon, running back, Buffalo Bills. The Bills will need some variety on Saturday, and Allen can’t do everything. Devin Singletary will carry most of the burden in the ground game (along with Allen) but, after rookie Zack Moss was ruled out, Yeldon will also play a part. He hasn’t taken a snap since October 13th.

What the Browns need to do to win: We’re assuming that, unlike the Pittsburgh Steelers last week, the Chiefs won’t gift the Browns 28 points in the first quarter. And Cleveland are up against a 25-year-old Patrick Mahomes, not a 38-year-old Ben Roethlisberger. That said, the Browns can win if they keep Mahomes off the field by chewing up the clock with Nick Chubb and the run game. Very difficult but not impossible.

What the Chiefs need to do to win: If they play at anywhere close to 80% of their ability, Kansas City have this. Baker Mayfield is far from a bust, but if the Chiefs load the box and stop the run, putting the burden on the Browns quarterback to beat Mahomes in a shoot-out, there’s only one winner.

Key player: Myles Garrett, defensive end, Cleveland Browns. Can the Browns stop Mahomes linking up with Travis Kelce and Tyreek Hill? If anyone can, it’s Garrett.

What the Buccaneers need to do to win: Tom Brady is diminished but still dangerous. One stat that has been doing the rounds this week is that Brady is a top-five among quarterbacks in QBR this season when he’s not under pressure and comparable with Nick Mullens when he is. But Brady coped pretty well against one of the best pass rushes in the NFL – Washington – last week. And there are signs that he and the Bucs offence are finally reaching their potential.

What the Saints need to do to win: The Saints dominated the two regular season meetings between the teams, outscoring the Bucs by almost 50 points. Their defence is better than that of Tampa Bay, but they’ll also need to cope with the Bucs’ more than competent pass rush. If Drew Brees is harried, he’ll need to find Alvin Kamara consistently to provide an outlet.

Key player: Ryan Succop, kicker, Tampa Bay Buccaneers. This game may well end up being the closest of the round. In terms of field goal percentage, Succop had the best regular season of his career (90.3% made) and Lutz his worst (82.1%). Who would you rather have taking a potentially game-winning kick?