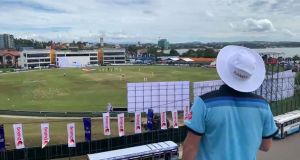 The second day in Galle was not much fun for Sri Lanka’s close fielders. Joe Root swept and swept and swept again, leaving bodies bruised and driving home England’s dominance amid a timely reminder of his own enduring class.

When New Zealand’s Kane Williamson recently rose to No 1 in the Test batting rankings, Root’s name barely cropped up in the resulting chatter following his first year in international cricket without a century and a troubling slide out of the top 10.

Expect this to change after the first Test of England’s packed 2021, however, after Root turned his overnight score of 66 into 168 not out and with it, more importantly, powered his side to 320 for four at stumps and a lead of 185 runs.

Just the first two sessions were possible due to rain and Root’s 18th Test century was not a lone hand. Dan Lawrence met the lofty expectations that followed his call-up for this tour, compiling an encouraging 73 from 150 balls on debut while very much looking the part.

It came amid a stand of 173 from 43 overs with his new captain that left Sri Lanka once ruing their meltdown with the bat on the opening day and further underlined just how far English batsmen have come as regards the art of playing spin on the subcontinent.

The County Championship may have shifted towards the less conducive margins of summer but in the past 20 years a hot-housed approach of specialist coaching, overseas placements and the emergence of the Merlyn bowling machine sees them arrive in Asia well equipped.

Root can probably lay claim to being the cream of the current crop. His reading of length is the key, aiding the swift decision of whether to rock back or push forward. And then there is the sweep, a shot he unfurls so regularly and effectively as to wonder whether he is in fact auditioning for the GB curling team.

That said, the shot was nearly his undoing first thing when, resuming on 66 following a rain-delayed start, he survived a reviewed lbw shout from Dilruwan Perera second ball thanks to umpire’s call on impact. This was one of just a handful he missed all day, however, with the ragged old Kookaburra repeatedly sent fizzing through the legside – when it hadn’t struck poor Kusal Mendis at short leg.

Root was joined by Lawrence in the second over of the day when Jonny Bairstow pushed forward and edged Lasith Embuldeniya to slip without adding to his overnight 47. And it didn’t take long for the 23-year-old debutant to settle into a nice tempo here as he left the ball judiciously and began to unfurling some of the rubber-wristed magic that has got him this far.

Lawrence pushed his first ball in Test cricket for a single, drove his second for four to take England into the lead and then, after a patient spell and a couple more boundaries along the ground, seemed to fully announce himself to this new global audience with a wonderful slog-swept six over wide long-on; holding the pose for a few seconds suggested a confident young player who possesses a touch of swagger.

Sri Lank’s spin trio and their stand-in captain, Dinesh Chandimal, began to run out of ideas as Root and Lawrence pushed on from 131 for three to 206 for three at lunch. Perera in particular disappointed. The off-spinner was Sri Lanka’s leading wicket-taker in the 2018 series but appears more challenged this time by an England top six that, according to Cricinfo’s Andrew McGlashan, is the first since 1994 to consist entirely of right-handers.

Certainly Mickey Arthur, Sri Lanka’s demonstrative head coach, cut a frustrated figure after the interval. Root had just brought up his seventh century as captain – dinking the single he needed – when a duffed reverse-sweep saw the ball plop into the hands of short leg off the glove but the appeals turned down.

Sri Lanka’s subsequent review was unsuccessful and the decision by third umpire Lyndon Hannibal seemingly clear to understand: the ball had hit the ground in between its contact with bat and then glove. But this did not stop Arthur slamming a water bottle onto the floor and then remonstrating with the off-field officials.

Root by contrast stayed in his bubble, never erring from his methods and cruising to his eighth knock north of 150, before surpassing Kevin Pietersen’s 151 in Colombo back in 2012 as England’s highest Test score on the island.

Before that came Lawrence’s maiden Test half-century from 95 balls via a typically whipped single down the ground. The right-hander slightly lost his tempo thereafter however – perhaps a result of the heat and vertiginous thoughts of three figures – as as a couple of edges burst through the hands of slip and keeper.

Lawrence eventually fell after the second new ball, caught by Mendis at forward short leg as Perera finally got one to rear off the surface and take the glove. After exacting some revenge with another hard sweep that smashed Mendis in the shoulder, Root was still there at tea – with Jos Buttler for company on seven – before heavy rain washed out the final session.

Lawrence had departed for the exact same score as Root made on his debut in Nagpur in 2012. And as was the case back then, the cognoscenti appear to concur that England may well have a gem on their hands. – Guardian