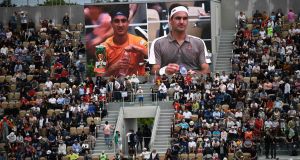 Switzerland’s Roger Federer (right) and Italy’s Lorenzo Sonego pictured on the big screen as they take a drink during a break during their men’s singles first-round match at the French Open at Roland Garros in Paris. Photograph: Anne-Christine Poujoulat/AFP/Getty Images

The old and the new shone on the first day of the refurbished French Open, but the winning return of Roger Federer after an absence of four years grabbed most insistently at the heart strings of the faithful on Court Philippe Chatrier.

The creaking stadium has been knocked down and rebuilt, with a roof to come, but the welcome for the 37-year-old Swiss was as warm as ever. Although he played well, brilliantly in bursts, he had to fight hard towards the end before seeing off the determined challenge of the 24-year-old Italian Lorenzo Sonego, 6-2 6-4 6-4 in an hour and 41 minutes.

“I feel that the public missed me, and I missed them,” Federer said later, although his Parisian comeback was not without trepidation. “There needs to be extra preparation for the clay court season for me – especially this year, because I’m not getting any younger, and I haven’t played many years on the clay now.”

He said that he had to work harder this time to get into shape for a fortnight of tennis on clay. “For example, I was training more for endurance, even though it’s not always pleasant to do that. And I guess it’s a good thing for the rest of my career, as well, to train in this way and for the rest of the season.

“I also hit the balls very hard – like you have to do on clay – but this can help you afterwards in the season, on hard or grass, and it was also a change. If you’re constantly doing the same thing, it gets boring. All this was part of my decision-making process. There was also the desire, and the desire was there. I felt like doing it.”

Federer made the quarter-finals in Madrid and Rome to prepare for his first match at Roland Garros since 2015, and there were positive signs that his game and fitness are in decent shape. “I enjoyed Madrid, I enjoyed Rome,” he said. “I’m happy to be here. The reception I got today was crazy, was really nice to see a full stadium for a first round.

“There has been some pressure in the beginning, obviously some nerves. Many people wanted to know how it was going to be for me. No problems with my body before or after the match.”

If Rafael Nadal, who plays on Monday, has been handed the draw from heaven, his old Swiss rival could hardly complain about his fixture list. His second-round opponent is Oscar Otte, a 25-year-old lucky loser from Germany ranked 145 in the world, and who will be thrilled to share the big stage with Federer (as well as bank the second-round prize money of €87,000) after a 6-3 6-1 4-6 6-0 win over the Tunisian Malek Jaziri sprinkled with 11 aces.

When Federer’s one-time shadow, Grigor Dimitrov, bagelled world No 317 Janko Tipsarevic for a two-set lead then went a break up in the third, he probably was thinking about dinner arrangements for the evening in the city he knows so well. However, Tipsarevic, just seven matches into a comeback after a 15-month break, flicked a switch in his memory to discover some of his old form, pushing the Bulgarian all the way to the line.

Dimitrov hung on to win 6-3 6-0 3-6 6-7 (4) 6-4 in just over three hours, the longest match of the day. He next plays 11th seed Marin Cilic, who took just two hours and 10 minutes to beat the Italian Thomas Fabbiano in three sets. “I lost focus,” Dimitrov said, revealing a shoulder injury is still on the mend. “But I can’t sit around and wait for everything to be 100 per cent in order for me to compete.”

Cilic, who has beaten Dimitrov in four of their five matches, has struggled for form and said, “I had a couple of okay tournaments. In those tournaments I was looking to have match play. It’s important when you come to the grand slams that you are focused every single session and transform that mentality. “

He looked comfortable beating Fabbiano 6-3 7-5 6-1 and probably was being overly generous when he said: “To play Grigor in the second round is one of the toughest draws. I know that Grigor didn’t have as many wins as we would expect, but I still think that his level is good.”

There was a solid opening win for the exciting Stefanos Tsitsipas, in three-sets over Maximilian Marterer, and disappointment (with monetary compensation) for the Canadian teenager, Felix Auger-Aliassime, as well as the veteran American, Sam Querrey, both of whom had to withdraw on Sunday without hitting a ball.

Auger-Aliassime, who has climbed to 28 in the rankings at 18, aggravated a left adductor muscle when losing to Benoit Paire in the Lyon Open final on Saturday. The Spaniard Alejandro Davidovich Fokina will replace him against the Australian Jordan Thompson on Tuesday.

“I’m at peace knowing that I’ll probably be ready for the grass,” said Auger-Aliassime, who hopes to play in Stuttgart in a fortnight and then head for Wimbledon.

Querrey, who was due to play the Spanish qualifier Pedro Martínez on Monday, has torn an abdominal muscle. The Swiss Henri Laaksonen takes his place. – Guardian