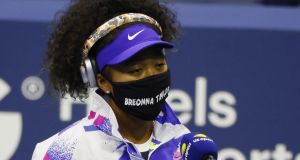 Naomi Osaka wears a facemask with Breonna Taylor’s name on it ahead of her US Open first round match. Photograph: Jason Szenes/EPA

Naomi Osaka vowed to continue highlighting issues of racial injustice after reaching the second round of the US Open with a hard-fought win over Japanese compatriot Misaki Doi.

Osaka, who initially pulled out of her semi-final at last week’s Western & Southern Open in solidarity with protesters, wore a face-mask onto the court bearing the name of Breonna Taylor, who was shot dead by police in Louisville in March.

The 22-year-old Osaka said after her 6-2 5-7 6-2 win that she planned to wear a mask bearing the name of a different shooting victim for each round that she remains in this year’s tournament.

Osaka told Amazon Prime: “Actually I have seven (masks), and it’s quite sad that seven masks isn’t enough for the amount of names.

“So hopefully I will get to the finals and you can see all of them.”

Osaka had reversed her decision to withdraw from last week’s tournament after discussions with organisers, only to subsequently pull out ahead of the final against Victoria Azarenka due to a hamstring injury.

And that affliction appeared evident in the way she laboured for long periods, requiring just over two hours to secure victory over an opponent who had won just one match in seven previous appearances in the US Open main draw.

“It was very difficult and I kind of expected it because I know she’s a tough opponent,” added Osaka. “I knew there was a chance it would get really long and I’ll just have to see how I feel tomorrow.”

With six of the women’s world top 10 absent from this year’s tournament, Osaka is one of the favourites to reclaim the title she first won in 2018.

But despite appearing to back up those predictions in an opening set in which she threatened to sweep Doi aside, she was left looking tired and unreliable for much of the second in which Doi fired back.

The world number 89 moved into a 5-2 lead and although Osaka hit back to level, Doi kept her nerve to force the decider.

Having been broken in the opening game, Doi summoned one final effort to fashion two break points in the next, but Osaka survived and went on to claim what was ultimately a clear if not entirely convincing win.

Nor was it entirely plain sailing for number one seed Karolina Pliskova who dropped serve in her first game but recovered to dispatch Anhelina Kalinina.

The world number three, promoted to top billing following the withdrawals of Ashleigh Barty and Simona Halep, won 6-4 6-0 in just over an hour inside the empty Arthur Ashe Stadium.

The tournament in New York is being played behind closed doors with just a handful of support staff in attendance.

The 28-year-old Czech, beaten early on at last week’s Western & Southern Open, said: “I felt better than in my previous match last week. I think the centre court is better place to play.

“I mean, it’s still without people, but I just felt somehow a little better. And I had a lot of practice on this court, so I felt just quite used to it.

But there will be no repeat of last year’s run to the third round for 16-year-old Coco Gauff.

The American bowed out at the first hurdle, going down 6-3 5-7 6-4 to Latvian 31st seed Anastasija Sevastova.