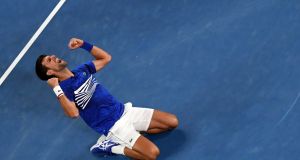 What should have been the match of the tournament – of the young year, in fact – between the two best players in the world, each of them fit, fresh and in form after barely hindered routes to the final of the 2019 Australian Open, disintegrated into an embarrassing, one–man celebration for Noval Djokovic over Rafael Nadal.

His 6–3, 6–2, 6–3 win on Rod Laver Arena brought his career count against the Spaniard to 28–25, but it was one of the poorest of their contests, stretching back to 2006. It earned Djokovic a record seventh title here – and his third major in a row. That’s some roll. He owns three of the four and has the chance to do another Novak slam in Paris, Nadal’s only safe harbour left.

The world No1 sits on 15 slams in total, moving ahead of Pete Sampras, two behind Nadal and five behind Roger Federer. It is becoming increasingly likely that the dynamic of the three–cornered hegemony of the modern era is about to change over the course of the remaining three majors this season.

Djokovic was as magnificent as he has been in any of his many triumphs, here and elsewhere. He won 40 of 50 first serves, 16 of 19 on second attempt, hit eight aces and a mere nine unforced errors. Returning on and inside the baseline, he did not allow Nadal’s revamped serve to get out of second gear, and there were only a handful of rallies worthy of the occasion.

“Novak’s level was amazing tonight,” Nadal said courtside, redundantly. “I have had some tough moments [IN THE]past 12 months, nine events, and not able to finish two of them, including this one. If tonight was not my night, it is important for me to be where I am today, coming back from injury. I really believed [THIS WAS]a great two weeks of tennis. I’m going to keep fighting hard.”

“To be standing here and win three out of [THE LAST]four slams, is amazing. I’m speechless,” Djokovic said. “Obviously, it was a tough match for you,” he told Nadal. “[YOU HAVE BEEN] unfortunate throughout your career to have so many injuries, but you show what is the definition of the fighting spirit.

Sending a message to his wife and two children, he added: “Trophies are even more special when I have someone so special and dear to share them with, along with my two brothers and my parents.” He was as businesslike beforehand as he was sentimental afterwards.

When Djokovic cracked the Nadal serve after seven minutes, it was the first time the Spaniard had given an opponent a look in a set since James Duckworth broke him in the first round – but he had regrouped so well he arrived at the final without dropping a set, keeping his court time down to a little over 12 hours in six matches.

It began to look as if Djokovic was going to do to the world number two what he’d done to Lucas Pouille in the semi–finals, and what Nadal had done to Tomas Berdych in the fourth round. Djokovic was racing through his service games, while Nadal was fighting to stay in the point.

The Spaniard was still in it at 2–4, but he had not taken a single point off Djokovic’s first 16 serves. It wasn’t until the ninth game that Nadal found some rhythm and spark off the ground, grabbing a point on the Djokovic serve after 33 minutes, his only success of the set.

Nadal, anxious and hurrying his shots, needed to find another gear, but it seemed his only hope of kickstarting a fightback was a Djokovic meltdown – and we don’t see many of those. In 224 matches in majors, Djokovic has lost only five after winning the first set. That was a brick wall that showed no sign of collapsing here.

At the end of a rare competitive rally, Nadal tapped a balletic lob in the fifth game of the second set he thought had saved one of two break points, but it drifted long and his suffering continued. After an hour, he still had not fashioned a break point of his own.

There was fight in him but none of the certainty or precision of the earlier rounds. When he dumped a backhand from the baseline to give up his serve for the third time – his 20th unforced error to Djokovic’s four in 85 points – he was a forlorn and frustrated figure.

A hat–trick of Djokovic aces – each of them 119mph – to hold to love for a two–set lead was a dagger that went deep to the heart of Nadal’s resolve. Only three times in his career has he come back to win from such a deficit.

His opponent remained in a scarily fixed zone – the same one, it seems, he spoke about when making mincemeat of Pouille in the Frenchman’s first slam semi–final. But he was doing this to one of the game’s greatest players. It was not a pretty sight.

Probably not since Nadal did the same to David Ferrer to win the French Open in 2013 has a slam final looked so lopsided. Nadal was being marched towards the gallows without even the benefit of a hood. As they embarked on the final stretch, the crowd indulged in the ultimate false empathy: overcheering Nadal’s occasional successes. He still punched the air, muscles rippling, but surely sensed the end was not far away.

At least they were finishing in the dark. The traditional night–time final looked at one point as if it might end before the glow of day had slipped away. As a spectacle, it had become engrossing for all the wrong reasons: an argument between old friends that had gone horribly wrong.

Playing for little more than dignity, Nadal was a passenger on Djokovic’s ship. When it docked, a little over two hours after they set sail, he was put ashore without ceremony, broken in his final service game.