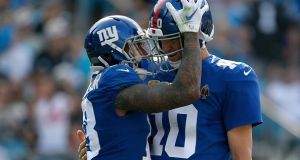 The New York Giants’ 33-31 last-second loss against the Carolina Panthers on Sunday capped a tumultuous week for the organisation.

In an interview taped earlier in the week with ESPN’s Josina Anderson, star wide receiver Odell Beckham Jr responded “I don’t know,” when asked if there was an issue at quarterback in New York.

Beckham Jr finished Sunday’s contest with 131 receiving yards and a touchdown on eight catches. Ironically, he also threw for a 57-yard touchdown on a trick play.

It was the type of up-and-down quarterback play many critics say has kept the Giants out of the playoffs five of the last six seasons.

The same inconsistent play that led to the two-time Super Bowl MVP’s being benched in week 13 of the 2017 NFL season, which for a moment felt like the end of his tenure in New York before he started week 14 and received a standing ovation taking the field.

He threw for one touchdown and two interceptions in that loss against the division-rival Dallas Cowboys. The Giants lost, 30-10. New York finished last season 3-13, good for the second-worst record in football next to the winless Cleveland Browns.

The Giants are mired in a 1-4 start to 2018, tied with six other teams for the worst record in the NFL.

Many fans wanted them to draft a quarterback last offseason. They instead selected Penn State prospect Saquon Barkley with the No.2 overall pick in the 2018 NFL draft, making him the highest-drafted running back since Reggie Bush in 2006.

Barkley has been as advertised: a game-changing, workhorse running back with excellent receiving skills. But his impact alone won’t bring hope to a demanding fan base that hasn’t celebrated playoff success since 2011.

Quarterbacks are capable of making that impact. They represent a rare position in sports where a single person can resemble a beacon of new hope and change for an organisation.

In addition to Mayfield, three quarterbacks taken after Barkley (Sam Darnold third overall to the Jets, Josh Allen seventh overall to the Bills, and Josh Rosen, 10th overall to the Cardinals) in the draft won games on Sunday. At the very least, they represent the potential for a bright future to their team’s fan bases.

If the Giants continue to lose this season, they might be wise to draft whichever top quarterback prospect falls to them in the first round.

Either way, this could very well be the last season of Eli in New York.

Game of the weekend: Rams defeat the Seahawks, 33-31

Los Angeles rallied for nine fourth-quarter points on the road to defeat Seattle, 33-31. Todd Gurley II ran in three touchdowns for the Rams, whose 5-0 start makes them one of two undefeated teams left in football (Kansas City Chiefs are the other).

Graham Gano’s 63-yard kick - the longest of his career - squeaked through the uprights in Carolina as the Panthers walked off with a 33-31 victory against the New York Giants with time expiring. The win moved Carolina to 3-1, placing them tied atop the NFC South standings with the New Orleans Saints.

Patrick Mahomes and the undefeated Chiefs travel to Foxborough to take on Tom Brady and the New England Patriots. In what could be a preview of the AFC playoffs, Bill Belichick and his coaching staff will hope to slow the momentum of Andy Reid and his second-year quarterback.