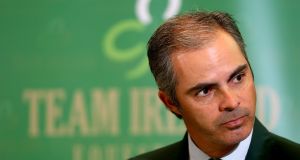 “We are very much looking forward to competing in Barcelona against 14 strong teams,” said Pessoa. “We are looking to put in a good performance and to qualify for the final on Sunday. We will be trying to try to erase the bad taste that our result in Tryon (at the World Equestrian Games) has left, as it would be unfortunate if Tryon was the reflection of what has overall been a very successful Nations’ Cup season. We want to finish on a high.”

Ireland comfortably qualified for the final back in August having finished second on the Europe Division 1 Nations’ Cup league table. The other nations who qualified are Belgium, Switzerland, France, The Netherlands, Britain, Sweden, Germany, Italy, Spain, Austria, Canada, the USA, Brazil and the UAE.

Wednesday sees the start of the five-day Horse of the Year Show in Birmingham where Irish riders will be taking part in the international show jumping classes and also in the showing section. Large numbers of Irish visit this annual show, many interested in seeing how horses they bred or owned here fare with their new connections.