Loreto and Pegasus build on solid start to season 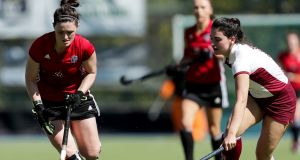 Sarah Torrans (right) of Loreto was in impressive form against Muckross at Grange Road on Saturday. Photograph: Inpho

Just two games in to the new Hockey League campaign and only Loreto and Pegasus have taken maximum points, both teams following their opening day victories with solid wins again on Saturday.

But while they ran out comfortable 5-0 winners at Grange Road in the end, it took Loreto half an hour to find a way through the Muckross defence, behind which goalkeeper Ellie McLoughlin was in fine form. The deadlock was broken when Sarah Torrans deflected home a penalty corner strike from Sarah Clarke and within three minutes Mia Jennings had doubled Loreto’s advantage.

Three more goals in 10 final quarter minutes put the gloss on the victory, Niamh Small getting the third before the impressive Torrans set up Siofra O’Brien for the fourth and then got her second of the game five minutes from time.

Having lost five of their first 11 games last season, seemingly making them also-rans in the competition, Loreto are now on an unbeaten streak of 11 Hockey League/Champions Trophy games.

Pegasus were also initially made to work hard for their points on Saturday when they took on Pembroke Wanderers at Serpentine Avenue, the home team taking a first quarter lead through Katie Jane Marshall. A double from Alex Speers, though, put the Belfast side ahead before half-time and a goal in each of the final quarters from Rachel Murdock and Kate Gourley secured the points, Sorcha Clarke getting a consolation score for Pembroke.

Cork Harlequins, meanwhile, suffered their second home defeat in a row after Aine Connery’s early strike for Old Alexandra proved to be the only goal of the game at Farmers Cross. UCD, though, bounced back from last week’s defeat to Pegasus to take the points from Ards thanks to a late Hannah McLoughlin goal from a penalty corner.

And at Park Avenue Belfast Harlequins fought back from 2-0 down to draw with Railway Union after Kate Lloyd and Sarah Hawkshaw had put the Dublin side in control. Zoe Wilson pulled a goal back before half-time before Lucy Geddes’ third quarter score secured a point.

1 Seán O’Brien: Anger over my parents’ break-up never left me
2 Madness or defiance? The GAA is taking a huge gamble in staging Championships
3 Sportsman to statesman, Marcus Rashford is a ray of light in the darkness
4 Plenty of positives for Farrell as Ireland hit the ground running
5 Ireland 50 Italy 17: Ireland player ratings
Real news has value SUBSCRIBE