Conor McGregor must forget the myth he has built around himself 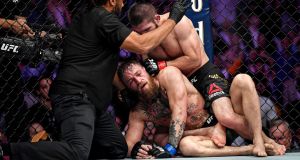 Conor McGregor has ridden a wave of outrageous fortune in Las Vegas that previously made him untold millions, but on Saturday night against Khabib Nurmagomedov the myth he has built around himself suffered a devastating blow in Sin City.

Once again McGregor gambled on his striking prowess to save the day, but he succumbed to a rear naked choke, just as he did to Nate Diaz in 2016, and the chance of winning back the lightweight crown vanished.

Arriving in Las Vegas, this shimmering desert city promises bright lights, glamour and great riches, but almost everyone leaves here shortly afterwards with their dreams unfulfilled and their pockets empty.

The violent aftermath of Saturday’s lightweight title clash has obscured how McGregor fell far short of his own lofty pronouncements, and how his return bore little resemblance to that of the king he proclaimed to be.

He had loudly stated that he would be triumphant on his return to the octagon, but the script he wrote was immediately ripped up by Nurmagomedov and a darker, more disturbing tale unfolded.

The action in the cage was predictable, with Nurmagomedov taking the fight to the floor and putting enormous pressure on McGregor for the first two rounds. The Irish man’s groundwork was at times superb, but defending from the bottom against the Russian is energy-sapping labour and eventually, inexorably, he ran out of steam and succumbed in the fourth round.

What is striking is that there were no surprises in what the Russian tried to do, and yet McGregor, returning to mixed martial arts after a 23-month hiatus, seemed incapable of stopping it. Only in the third round did he manage to keep the fight on the feet, but he couldn’t find the devastating knockout blow that would have ended the contest in his favour.

Having given the impression of being a sporting and financial mogul all week, in the end he was left sitting with his back to the fence, trying to process a defeat that was the furthest thing from his mind when he awoke on Saturday.

No matter how much he says it was his destiny, McGregor’s rise in the UFC had been so meteoric that he can scarcely believe it himself. There is no handbook for going from being on the dole to a pay-per-view megastar, and at times the chaos of his new life is apparent for all to see.

The few boundaries he has are forever changing; he is at times a humble student of the combat arts, knowledgeable and gracious, but more often he is brash and uncouth, talking himself up in a way that might make even Donald Trump blush.

His desire to appear in control at all times belies an insecurity that everything he has worked for could disappear just as quickly as it arrived.

In his sporting endeavours, he is surrounded by coaches and training partners who are among the very best at what they do, but when he fights there is a chain link fence between them.

His coaches and confidants cannot climb in and help him or pull the strings for him – when the referee starts the fight, he is very much on his own.

On more than one occasion this week McGregor has said that he is financially set for life thanks to his achievements in the octagon and the boxing ring, and that may be true – for now.

But sport, and in particular American sport, is littered with figures like boxer Mike Tyson and basketball prodigy Allen Iverson, men who seemingly had it all but couldn’t hold on to it and ended up broke.

McGregor appears to be hedging his financial bets, doing deals with Reebok and the makers of the Monster energy drink, as well as launching his own whiskey and clothing range, but nothing keeps the tills ringing like success in the cage.

And the cold, hard fact is that McGregor has lost two of his last four UFC fights, both in similar circumstances.

The brawl that broke out following Saturday night’s bout created an untenable security situation, and he and his entourage were quickly spirited away from the T-Mobile Arena, robbing journalists of the chance to ask him what had gone wrong.

Many will point to the hysteria surrounding the launch of his whiskey, the manic press conference performances and the closed, secretive camp.

The truth is probably that this young sport is growing and evolving so quickly that the skills and tactics used to beat Eddie Alvarez to claim his second crown are no longer hard currency in the cage, and that it’s harder to fight when you already have everything you could ever want.

Yet Nurmagomedov’s feet-first leap at McGregor’s friend and cornerman Dillon Danis may provide a path to redemption for the Irish man – if the Nevada State Athletic Commission bans Nurmagomedov for any considerable length of time, he will undoubtedly be stripped of the title.

That would open up for a showdown between McGregor and Tony Ferguson, who beat Anthony Pettis in Saturday’s co-main event in a blood-soaked barn-burner of a battle to make himself the number one lightweight contender.

But with his unorthodox style and hard-core attitude, Ferguson would hardly be an easier match-up than Nurmagomedov, and McGregor could find himself on the wrong end of another beating.

McGregor’s loss to Diaz proved to be a pivotal moment in his career, and he rebounded from it a more hungry, well-rounded and smarter fighter, ultimately using the lessons he learned to secure a second belt.

This new defeat robs his pre-fight bluster of any credibility that remained, making his path back a simple one. He will have to put aside his past achievements, his power and his money, and go back to doing what it was that got him to where he is now, for better or worse.

In short, he needs to forget the myth he has built around himself and concentrate solely on his next fight. Anything else is a gamble he can’t afford to take.